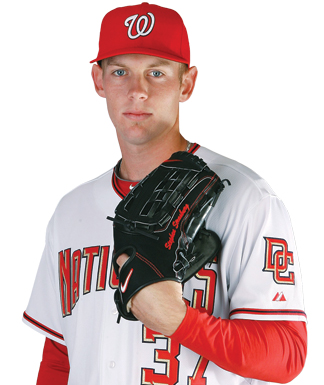 Without even throwing a pitch in the major leagues, Stephen Strasburg is already a sensation. The rookie phenom attracts a crowd where ever he goes, and for good reason: through 11 minor league starts, he is 7-2 with a 1.30 ERA, a strikeout-to-walk ratio of 65/13, and opposing hitters are batting just .158 against him. When I had a chance to see this guy, I took it.

The first shot I took was when Syracuse was playing in Rochester on May 18, which was a Tuesday. I had just started a job on Monday that I need to be up at 5 a.m. for, so I wasn’t thrilled with the prospect of being up that late when my body wasn’t used to being up early… but it was Strasburg. We weren’t sure if he’d make it to Buffalo, and it seemed like the last shot to see him for under $10.

A friend of mine was also very interested in going, and slowly but surely the trip came together. It ended up being four of us guys making the trek, overcast skies and all. The forecast called for rain, but you’re going to need more than a little precipitation to derail four young sports enthusiasts. Besides, the last time Don Paul got one right he had a full head of hair.

So off we went, eastward for Rochester. I didn’t know two of the guys personally (I had read their blogs before but they were friends of the friend), but fortunately it didn’t take long for the car talk to center on sports. Unfortunately though, it rained almost the entire way there. Did I say rained? I meant down poured. The second I go on the 90 and set the cruise control…at whichever speed you would not be appalled at me driving at…the rain came down and I had to use to gas pedal all the way there.

We parked next to the stadium at about 5:30, and the rain had slowed to a drizzle. The sun peaked out from time to time, and it looked as if the game would go on. As we made our way around the park to Will Call, there were players from both teams throwing and warming up on the field. The gates, however, didn’t open until 6, one hour before the start of the game. 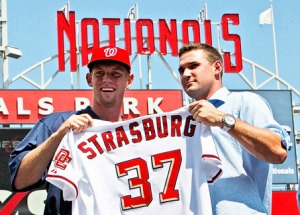 Our excursion for dinner went awry when a sad excuse for a rent-a-cop gave us directions to the middle of nowhere. By the time we walked back over the highway to the stadium, it was almost time for the gates to open. There was already a sizeable line when word came down that the game was postponed until the next day.

Our party was righty upset, as were others who made their way back home. But, being college kids, we decided to make a night out of it and sample Rochester’s finest export, Dinosaur BBQ. (Genny Light, who?)

Anyway, that trip was a failure. None of us could make it the next day for the make-up game (aka couldn’t get a night out from the ladies two days in a row…), so in order to avoid having some of our own making-up to do, we all sat at home and hope Strasburg stayed in the minors until the Chiefs paid a visit to Buffalo.

We got good news on May 29—Strasburg lost. He gave up three earned over 5+ innings to Scranton, including his first professional home run allowed. Leave it to the Yankees to rough up a pitcher. After that loss, it seemed Strasburg would get one more start in before getting called up, which would come during Buffalo’s home stand.

I was pumped. I took the subway down to Coca-Cola Field earlier during the week to get my tickets for the game. As I was crossing Washington Street, a fire truck stopped at a red light on Swan. When the car behind it honked its horn to “Lets-go-Buff-a-lo,” the engine sounded its siren right back to the beat. How can you not love this city? 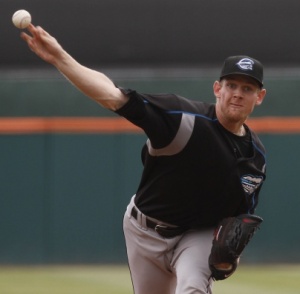 I digress… It was Tuesday if I recall, and the closest I could get was section 117 (row G, 5 rows up), in front of the visitors’ bullpen. I took the tickets, thinking I could probably walk down and watch Strasburg warm up.

Wrong. That affected a series of unfortunate events. We got on the subway at UB and sat with someone I knew who happened to also be going to the game. At the next stop an NFTA cop came on and asked for tickets. Apparently our Metro passes expired three days before, so we got kicked off the train and had to go buy a ticket. I guess it could have been worse if she would have given us a ticket, but it delayed our trip even more. Then when the next train finally came, we found our seats at the end of the car, where there was a guy holding a bike. Were sitting there… and the guy sneezes across the car and it lands on us and the people next to us. Now I’ve heard of projectile vomit, but never a projectile sneeze. Half the car looked on in disgust while my brother and I sat and looked at each other and didn’t know what to do. After we wiped ourselves off, it happened again! I usually hate exclamation points, but this situation needs it. Not once, but twice, a black guy carrying a bike shot sneeze/spit/grossness combo at us from across the subway, without as much as an “excuse me.” In hindsight, I should have given him an angry, condescending, Dane Cook “God bless you.” Thankfully, people a few seats over got off at the next stop, and we slid on down.

Strasburg gets loose along the outfield wall

Finally—FINALLY—we made it to the stadium. We went right to our seats and waited for Strasburg to come out. People lined the left field wall all the way down in hopes of getting a glimpse of the legend-in-the-making. I’ve never seen anything like it. I felt bad for people with front row tickets who couldn’t even see because people were standing in front of them. About 35 minutes before the game, there was a Strasburg sighting at last. People cheered for ever stretch and jog this man did.

When he finally a glove on and threw, I was very impressed with what I saw. Just the effortlessness of his throwing motion amazed me; the ball exploded out of his hand and it didn’t even look like he was trying. This man throws long toss harder than I throw anything, and I’m no slouch. His fastball leaves nothing more than a vapor trail and his curveball bites like a starved piranha. His own teammates looked onto his warm-up session in amazement.

There are five-tool players, but this guy is a five senses players. You see a blur of white as the ball leaves his hand. You hear the ball traveling through the air, reminiscent of a Sidd Finch four seamer. You can smell the crackling of the air as the ball travels through it, like lightning on a hot summer night. You can feel the pop of the catcher’s mitt from the stands, like fireworks after a fridaynightbash! And for the players, they can taste his dust. Stephen Strasburg made it clear before the game even started that he is not like anything we’ve ever seen. 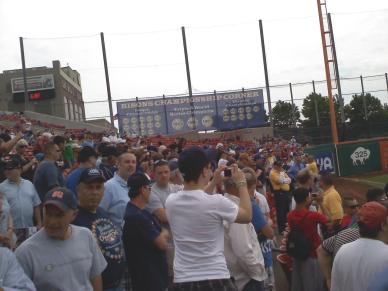 Fans crowded along the third base line for a look at the prodigy before the game. Bisons' security (yellow polos) look on.

When the game started, he was overpowering. I hesitate to say fans got their money’s worth because tickets were only $10, but they were certainly pleased with their purchase. Here’s the final stat line for his win: 5 innings pitched, 3 hits, 1 walk, no runs, 4 strikeouts and 89 pitches. At the plate, he went 1-for-2 with a strikeout and a run scored. If memory serves me correctly, he is now batting 3-for-6 on the year, a .500 average. Is there anything this guy can’t do?

Bisons’ third basemen Mike Hessman had the only swinging strikeout (a weak swing at that); the other four were looking. Strasburg had one K in every inning, and four batters hit the ball out of the infield. His perfect game was broken in the bottom of the third after an eight pitch walk to Dillon Gee, the Bisons’ pitcher; and the no-no was erased three pitches later when Jesus Feliciano ripped a single. The credibility of the radar gun at Bisons games is shaky, but they say he topped out at 99 mph (first inning), and leveled out around 95. His top velocities were hit only in the first inning. 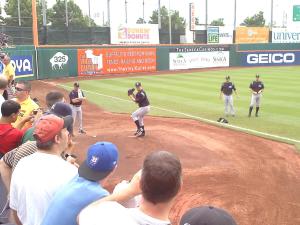 While Strasburg handled the Bisons with relative ease, the Herd did not lie down and allow themselves to be out muscled. No one went down on a three pitch strikeout, not even Gee. By my count, Buffalo hitters took Strasburg to full count seven times, or 37 percent of at-bats. That’s a number the rookie will need to bring down if he is to give the major league club a quality start.

Strasburg was pinch hit for in the top of the 6th with two outs and nobody on, with Syracuse leading, 4-0.

Overall, it was an awesome experience. Tickets for his major league debut have been sold out for almost a week, so it was cool getting to see him up close and personal for the final time before he got called up. Should Washington select Bryce Harper with the first pick in the June draft, the NL East better look out–that’s a lethal combination.