Or maybe he’s just not that old of a dog. Whichever the case, I credit Johnny Damon’s stay in New York with showing him the light.

After being placed on waivers and claimed by his formerly beloved Red Sox, Damon announced today that he will not waive his no-trade clause, and will stay in Detroit.

He claims it’s because he loves the city he’s in and the team he’s on. But let’s face it, nobody could love Detroit right about now. You think Buffalo has problems? Detroit is to SAT as Buffalo is to daily reading quiz.

So all that leaves is the team. The Tigers have some good players. Miguel Cabrera and Magglio Ordonez could make any team in the league better. Justin Verlander’s no slouch either. But after the top players, the drop off is fast. Detroit only has five pitchers with winning records (Verlander 14-8, Coke 7-2, Thomas 5-1, Bonnie 4-1, and Zumaya 2-1), but after Verlander, the other four have only three starts between them. Damon really wants to be on a team where only one starting pitcher has a winning record?

If that doesn’t do it for you, how about this stat: Detroit has a LOSING RECORD. They currently sit third in the AL Central at 62-63, 10 games out of first (and 15 out of the wild card). The Boston Herald has Damon quoted as saying about his teammates, “They feel we can make a strong push — at least make this (AL) Central race interesting. That’s why I’m going to stay.”

Strong push? Kansas City is closer to Detroit than Detroit is to Minnesota! They’ll need a push not to fall farther behind once September call-ups arrive. Ten games is not insurmountable at this point in the season, but it would be one for the ages if the Tigers come back. 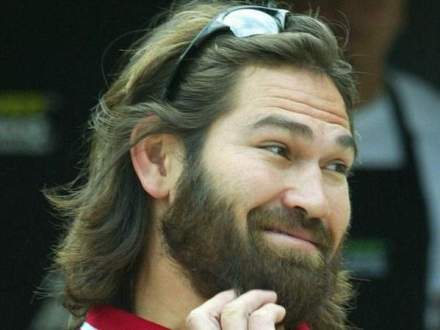 Maybe he looked in the mirror

The only logical explanation for Damon’s decision is that something must have happened to him in New York. And if it made him realize he should never go back to Boston, it was something good. He won championships with Boston, but winning it with the Yankees was different. The 2004 title may have been more important to his city, the aura of Yankee Stadium set him straight.

Maybe it was the tradition. Maybe it was the thrill of being expected to win it all every year. Perhaps the professionalism of shaving woke him up. And his arm wasn’t really that bad, he just wanted to play in front of Monument Park everyday. Heck, maybe he even fell in love with the power numbers a short porch in right provides.

Maybe he just thought pinstripes brought out his eyes. Whichever the case, the Boston chapter of Damon’s life was closed for good today. Check that–slammed shut. The most iconic figure from 2004 run just told the team he’s too good for them, and they can thank the Yankees.

—
In a related story, Chuck Norris released a statement today, in which he claimed the Yankees reduced him in stature. “All along I thought I was the only one who could teach an old dog new tricks, but here come the Yankees, putting me in my place. ‘Not again,’ I thought.”