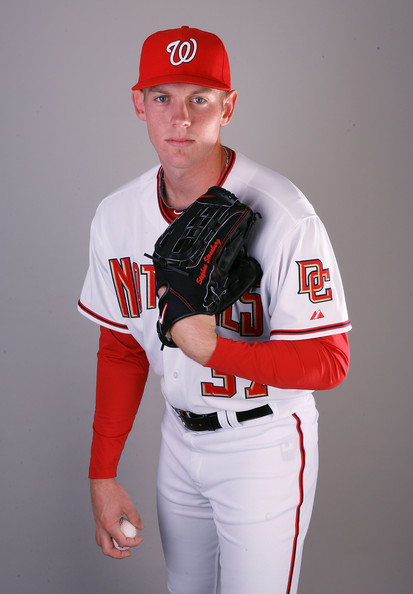 So do I. I saw him pitch once. And with his most recent developments, it looks like I may get to see him pitch again.

About two months ago, he was all the rave. He was trending on Twitter and his starts were must-see television. In his first major league start against a Triple-A team Pittsburgh, he struck out 14 batters and wowed fans with blazing heat and knee-buckling hooks. The game was even broadcast live on the Internet–well, the first six innings at least.

But two DL stints later, Stephen Strasburg is yesterday’s news. Yesterday after an extensive MRI, it was revealed that Washington’s 15 million-dollar man has a torn elbow ligament and will likely need Tommy John surgery; a surgery that takes players a minimum one calendar year to recover from, usually more.

Just to spell this out: Strasburg will miss all of this year. He may also miss all of next year.

If this kid is as super-human as they say he his, he’ll be able to start throwing again next spring. Soon enough he’ll be throwing off a mound, and then he’ll work his way from simulated games to rehab starts. (Side note– what exactly is a simulated game? Is anyone else even on the diamond besides a catcher? If so, do batters swing? Or do they just stand in for pitches? Where can I watch one of these games? Or even better, where can I sign up to be a stand-in hitter? Well, not technically a hitter, but you know what I mean. Someone make this happen.) Once he begins rehabbing, they’ll have Strasburg start in the lower leagues and work his way up. But they way they talk about him in the press, I’m pretty sure he could strike out Single-A guys left-handed. If all goes according to (my) plan, he’ll be back up to Triple-A Syracuse about Labor Day next year.

I know you know what that means. Roadtrip! If the schedule doesn’t have Strasburg coming back to Buffalo, my schedule will have me going to Syracuse, or Rochester if they play the Red Wings.

I know you’re bummed out that you no longer look like a fantasy wiz for drafting Strasburg in the second round (for your fantasy baseball team which is now doomed), but look at the bright side, you get to see him pitch again. If one is good, two is better, right? And the first time around was great. I’ll be sitting somewhere down the third base line. See you there.

P.S. I’ll bet you a hat of Dippin’ Dots at that game that Dr. James Andrews does the surgery. Any takers? Double-or-nothing Strasburg has another base hit in the game.