Week 3. Still haven’t figured out this whole “spread” thing yet, but it’s a work in progress.

Here’s a chart of how the first round running backs are doing so far. Just something I’m tracking this year.

Picks:
NEW ENGLAND (-14) over Buffalo
Ryan Fitzpatrick or not, this game won’t be any closer than last week. One more point of the line won’t make a difference.

NY GIANTS (-3) over Tennessee
Neither team played well last week, but I’m going with the one who didn’t pull their starting quarterback in Week 2.

Cleveland (+10 1/2) over BALTIMORE
I’m high on the Ravens this year, but they haven’t shown much yet. I would usually jump on Baltimore in this one, but (I think) I’m learning better with this big of a line.

Pittsburgh (-2 1/2)  over TAMPA BAY
Pittsburgh’s 2-0 without Roethlisberger mainly because of their defense. Tampa Bay is 2-0 as well, but I wouldn’t be surprised if Josh Freeman gets stymied by the Steeler D. One offensive touchdown should do the trick.

NEW ORLEANS (-4) over Atlanta
Atlanta ran up the score last week largely without Michael Turner, but I’ll take the Saints at home. Something tells me I should go with Atlanta, especially given the importance of this game within the division, but I’m staying with the champs. 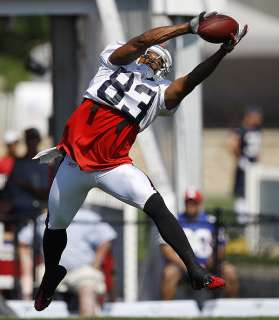 "I still exist! You don't even need to throw the ball near me. I'll catch it."

Detroit (+11) over MINNESOTA
Hmmmmmmm. Still waiting for Brett to prove all the doubters wrong. Detroit could be a good opponent to do it against, but I’m not betting anything on a 40-year-old football player. With a line this big I have to go Detroit. Jahvid Best versus the Vikings’ run defense will be story.

HOUSTON (-3) over Dallas
I want Dallas to win. I really do. I feel bad for Tony Romo. I know they are a good team and they will win at some point, but what about Sunday? I have too many questions to pick the Cowboys with any confidence; and I’m pretty certain Matt Schaub is the real deal. I picked Dallas the last two weeks and got burnt. Houston shows the country who the dominant team of Texas is.

Washington (-3 1/2) over ST. LOUIS
Last week Oakland was -3 1/2 against the Rams at home. Yea, the Rams covered, and yea, now they’re at home. So maybe I should pick St. Louis. But here’s my take: Jason Campbell’s old team is way better than his new one.

JACKSONVILLE (+3) over Philadelphia
The Eagles had trouble closing out Detroit last week, which means one of two things: 1) A Shaun Hill led Detroit team isn’t as bad as we though 2) The Mike Vick Eagles aren’t as good as we thought. Come on. Option 2 is way more likely. MJD must get going early.

Indianapolis (-5 1/2) over DENVER
Indi rebounded well after falling to Houston Week 1. Some teams have trouble adjusting to the air in Denver, but if you had to pick one team to do it flawlessly it would be the Colts.

San Diego over SEATTLE (+5 1/2)
Sorry Pete Carroll. The Chargers are rolling again–as they should be. Justin Forsett isn’t going to cut it.

ARIZONA (-4) over Oakland
Can’t express how much I hate the Raiders as a team this year. Nice week for Run DMC last week, but I can’t pick a team who brought in a quarterback human to take snaps in the offseason and already put him on the bench… especially on the road. Beanie Wells could make his first start, too.

Jets (+2 1/2) over MIAMI
Always good when division opponents can beat each other up. Shonn Greene still sucks, but Sanchez looked good against the hoodie while Miami was beating up on an old man. Old guy in hoodie > old guy under center.

Green Bay (-3) over CHICAGO
You saw the game last week, right? Green Bay is more than three points better than Chicago; home, away, or on the moon.

One thought on “Week 3 NFL picks”