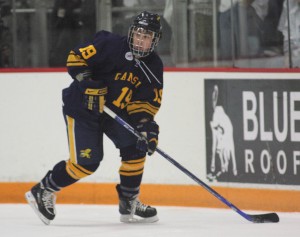 It has been nearly two years to the day since the Canisius and Niagara hockey teams last met. When Tuesday rolls around, the Griffs are hoping the wait will be well worth it.

“This is going to be a big game,” senior captain Phil Rauch said. “Probably the biggest of our college careers. Ever since we lost to them two years ago, we’ve wanted to get back at them.”

Canisius has beaten Niagara only three times since 2002, but this time, things may be different.

Canisius is coming off one of its best seasons in recent history, which included a trip to the Atlantic Hockey semifinals, and has started out hot this year. Niagara, on the other hand, had its league (College Hockey America) disband after the conclusion of last season. Niagara joined the Atlantic Hockey Association when no other league offered it membership.

Canisius has scored 19 goals so far this season and owns a 3-1-1 record, while Niagara has found the back of the net only 10 times and is still searching for its first win on this young season.

Historically, Niagara has gotten the better of the Griffs when they have met on the ice. In total, the two teams have played each other 19 times from since 1997, and Niagara leads the all-time series 12-6-1. Niagara has also outscored Canisius 74-47 in those games.

Canisius’ offense will be led by the senior duo of Cory Conacher and Vincent Scarsella, who have a combined six goals and 13 points through five games. The Griffs also have very good depth that will provide secondary scoring should Niagara shut down the top line.

The Canisius power play, which was such an asset last year, is looking strong again, even with newcomers running the unit. Special teams may be the difference against Niagara.

“I think it’s going to come down to the power-play goals on Tuesday,” Conacher said. “Against Niagara it’s always a battle. It’s going to be all about the PK and PP, and whoever wins that game is probably going to win the overall game.” 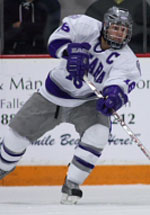 Junior Dan Morrison has been a workhorse in goal, playing every game this season. He will have to contend with Niagara’s Paul Zanette and Ryan Annesley, the team’s captain. Zanette has scored three goals in four games, two of them coming on the power play, while Annesley leads the Purple Eagles with five points from defense.

Conacher currently leads Canisius in points with eight, and his five goals tie him for fourth nationally. Freshman Kyle Gibbons is not far behind with three goals and two assists. However, Gibbons isn’t the only young player who is playing well.

“Just because [the other freshmen] are not on the scoresheet doesn’t mean they’re not doing as much as Gibbons,” Scarsella said.

The newcomers are filling the holes well and make every line a threat to score. “This year we have a lot more depth than we’ve ever had,” Rauch said. “We can count on every line to go out there in any situation and get it done.”

The veterans are using their experience to set an example for the younger guys on the team going into a game this big.

“I remember my freshman year, I think I shook the whole time leading up to the [Niagara] game,” Rauch said. “You just have to stay calm; it’s just like any other game. You just have to go out there and give it your all.”

The teams meet at the Buffalo State Sports Arena at 7:05 p.m. on Tuesday. All students at the game will receive a free “White Out” t-shirt. There will be a shuttle running back and forth from the Student Center to Buff St., starting an hour before the game. Admission is free for all students with a valid ID.

Junior Dan Morrison will be between the pipes for Canisius, and, in all likelihood, it will be freshman Carsen Chubak for Niagara. So far this season, Chubak has been named Atlantic Hockey Rookie of the Week, while Morrison is the reigning Atlantic Hockey Goaltender of the Week.

The Griffin took a look at the two goaltenders; only to find out they have extremely similar numbers. Here’s a look at how the pads stack up: 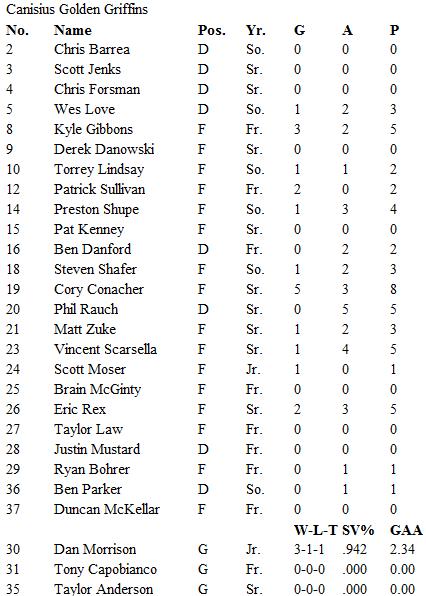 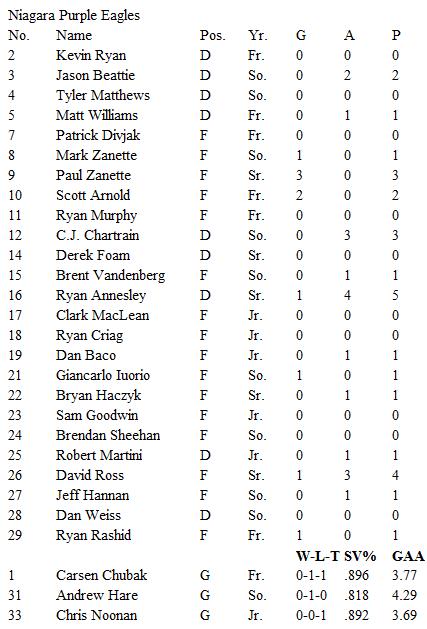 This post is the extended version of an article appearing in The Griffin, Friday, Oct. 29, that was cut for space constraints. The piece was a collaborative work by two writers, whose names are withheld for privacy. You can see the article here.