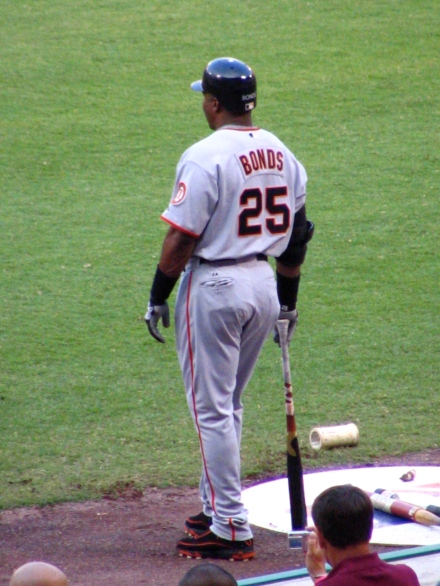 Even if Bonds is acquitted of the charges, he will likely be lumped with O.J. Simpson in the "everyone-knows-he-did-it-we-just-couldn't-prove-it" category.

In December 2003, Barry Bonds spent nearly three hours in a federal court in San Francisco answering questions about drug and steroid use in sports. In November 2007, an indictment was filed against Bonds, charging him with four counts of perjury and one count of obstruction of justice.

The most important date in the sequence is likely Aug. 7, 2007, when Bonds hit home run No. 756 to break Hank Aaron’s all-time record. With this feat, Bonds became one of the game’s most vaunted sluggers, as well as one of the most hated.

Fans love to see the long ball. But taking claim to one of sports’ most revered records is sure to make you some enemies in the process, even if you do it clean. Doing it amid swirling steroid allegations is sure to put you on the list of public enemies.

It could be argued that the prosecution wouldn’t have pushed this case so hard if Bonds hadn’t broken the record, and that point certainly has some merit. The legal system loves to make examples of people. If the Major League home run king (insert asterisk at your discretion) can’t get away with it, what would make Joe Average minor leaguer think he can? Even if Bonds was only No. 2 or 3 in the HR list, he’d still be a high-enough profile player to make people think twice.

That’s what this case has to be about, making an example of Bonds. It’s going to take a lot to convict Bonds against his all-star team of lawyers, especially if former trainer Greg Anderson won’t testify.  There are three possible outcomes we can learn from this case: 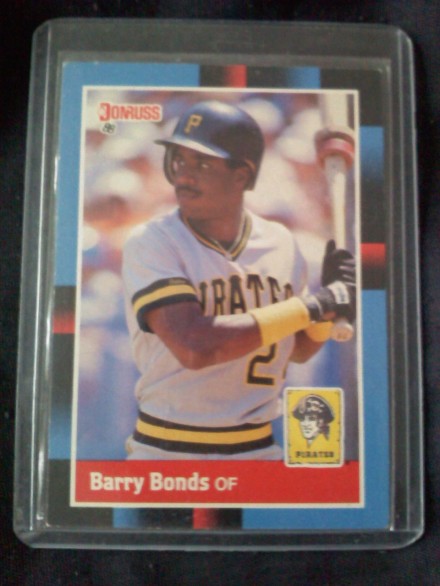 You've seen pictures of Barry Bonds circa 2003, looking thick and hefty. This is a card I have of thin Barry Bonds from 1987. Quite a difference.

The way I understand the indictment, Bonds has to show that he either didn’t take steroids or didn’t know about it. Bullet points one and two would acquit him of the charges, since it wouldn’t be lying if that’s what he really thought. The prosecution must show that Bonds knew what he was taking back in 2003, which is not going to be easy to do. Also, they jury has to be certain enough to convict him. If they stop caring or think it’s too minor of an offense to vote guilty, it’s possible Bonds will get off.

But that’s the legal side. Most of America is more concerned with the baseball side of this story. All the judiciary element can do is decide if Bonds is a criminal. His reputation and legacy as a baseball player will be defined by the public. If bullet points two or three are proven to be true, even some of the loyal Giants supporters – the only fans Bonds has left – may turn against him.

The court of public opinion has been hearing this case for the better part of a decade. The four men and eight women on the jury just started following it intently this week. Bonds is on trial, but to steal a line from “The Longest Yard,” the public is the judge, the jury, and in this particular case, the executioner.

For all intensive purposes, the criminal case really doesn’t matter. In an era of “he probably did,” public opinion already has Barry Bonds on death row. He cheated the game more American than apple pie and then lied to our faces about it in light of some pretty damning evidence.

The jury may already be out on the court of public opinion.

I’ve always been interested in the steroid trials in sports. I suffered through read Jose Canseco’s “Juiced” and I blew my shot with a pretty girl because I wanted to go home and read the Mitchell Report instead. Will I follow this case? Absolutely. I want to know if Bonds used anabolic steroids or the clear or testosterone or human growth hormone. I’m sick of hearing the “flax seed oil, man” defense.

The outcome of this case may not change any of my opinions, but I at least want to hear what happened. The home run record is one of the greatest milestones in all of sports, and we deserve an explanation.

Other facts about the case:

– ESPN’s Mark Fainaru-Wada. He’s your best bet.
– George Dohrmann of SI.
– Juliet Macur, New York Times.
– Gwen Knapp, San Francisco Chronicle.
– Ginny LaRoe, The Recorder (law.com).
– NYDN Sports I-Team, the New York Daily News’ general sports page.
– I put them all in this Twitter list, which may be easier to follow. If I find any new people, I’ll add them to the list.

– Four men, eight women.
– Screened for number of factors, such as when the last Giants game you attended was.
– Were reminded not to read newspapers or use social media through duration of case.