The Buffalo Sabres held a public memorial for Richard Martin at 11 a.m. Thursday morning in HSBC Arena, giving the city an opportunity to say farewell to a fallen legend. Couldn’t make it? Here’s how it all went down. 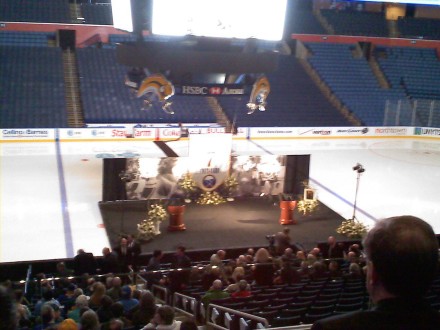 This obviously is not the greatest shot in the world, but it should give you a basic idea of the setup. The stage was set up in front of the players’ bench with two podiums. They took out the glass all the way down from hashmark to hashmark so everyone could see (not sure why they did it on both sides).

I was in the 200s. The center sections in the 100s and 200s were not open to the public. They were reserved for family, friends and media, although they were only about half filled. The rest of the sections along the bench side were pretty full, and no one was allowed on the other side — not that it was needed.

If I had to guess, I’d say the 100s were about 85 percent full and the 200s were slightly more open. Doors opened at 10 a.m., and I took this shot at 10:36, for those of you wondering how early people got there. The Buffalo News estimated about 2,500 people turned out for the event.

My phone camera didn’t like the lighting in the arena for some reason, but you can see the photo montage across the back of the stage and Martin’s French Connection banner was brought down from the rafters. The gold things are some kind of plant they had all over.

The current Sabres all walked in right before the ceremony started and sat in the front row (Tyler Myers was easy to pick out). Terry Pegula and his wife Kim were in attendance, as was Martin’s wife, Mikey.

WGRZ’s Ed Kilgore emceed the event and stood at the podium on the left (stage right) the entire time. Several speakers came to the other podium to give a eulogy, including Rene Robert, Gilbert Perreault, Danny Gare, Rick Jeanneret and a few personal friends of Rico’s, as well as his brother and son.

The family members had to stop to collect themselves a few times, but the others powered through their speeches. Martin’s son Corey, the last speaker, clearly had a difficult time giving his speech, and received a (well-deserved) standing ovation for his effort.

The popular theme among the speakers was Martin’s humor. Every speaker made extensive mention of the jokes Rico made and how funny he was. They all said they couldn’t repeat most of his jokes in public… but a few of the cleaner ones made the routine.

The second most mentioned thing was his personality. Everyone had a story about how Martin would drop what he was doing to sign an autograph or just make someone’s day. He kept pictures in his car, and would grab one and sign it if he thought it would brighten a stranger’s day. Even if he was approached during dinner, he wouldn’t hesitate to go sit down at someone’s table and make a few friends.

A shot you may never see again: Two French Connection banners hanging alone in the rafters.

The third most mentioned item was golf. Rico (everyone calls him Rico), I learned, was an excellent golfer who played anywhere and everywhere. There were plenty of stories about tournaments, pranks, you name it.

Of course, no tale of Rick Martin would be complete without mentioning the beer. Just ask Rene Robert. Robert pulled a Budweiser and a cigar out from his suit coat, looked to the rafters and said, “This is for you.” During his eulogy, he made a joke about Martin going to sit at a stranger’s table “even if his food got cold. Or worse, his beer got warm.” Even Corey made a reference to his dad always having a beer or glass of wine in his hand.

I sat through a lot of the event trying to figure out what it all means. If you can make out the years on Martin’s banner, it says 1971-1981. That’s 10 years before I was even born. Caring about his passing was more out of “that’s what Buffalo people do” than any feelings I had about him.

For me, going to this was just something cool to do on a Thursday morning. But for a lot of people in the community, Rick Martin was a friend. I kept hearing about how nice he was to everyone, always making time for people, but I didn’t really get it until the guy in front of me starting crying partway through. Maybe this didn’t mean that much to me personally, but the City of Buffalo needed a chance to say goodbye.

Kilgore mentioned an important point in all of this: His play on the ice got Martin’s number retired and his name in the record books, but it’s what he did after his career that drew thousands to his memorial. That’s a lesson a lot of current professional players have lost in the recent years, the idea of community, even after retirement.

Hopefully some of that message rubbed off on the current Sabres with the best seats in the house. After seeing the videos and hearing the testimonies of Rico, when that bagpipe player trailed off down the tunnel, everyone in the arena felt like they knew the guy. If only.