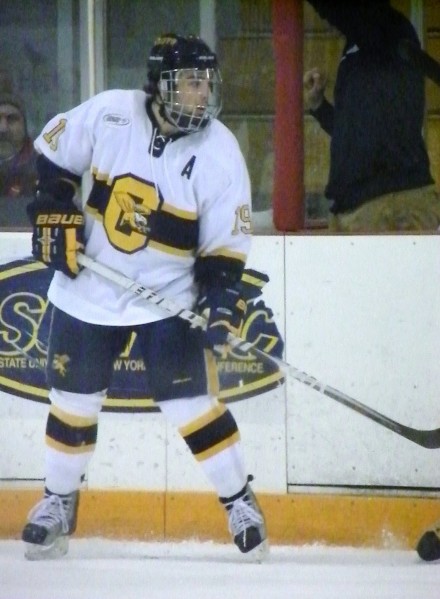 Cory Conacher was glad to lose his NCAA-mandated full cage in favor of the half-shield he can wear in the AHL, although his parents made sure he bought a mouth guard to protect his teeth.

The Canisius senior played roughly three and a half minutes on five shifts at left wing. Amerks head coach Chuck Weber said he wanted to get Conacher more ice time, but it just didn’t work out with the game being so close and the amount of penalties in the game.

“I thought he did some nice things,” Weber said. “Unfortunately, with the game being as close as it was, he didn’t play as much late. A number of times I called his number in the second and early in the third, and we ended up getting either a D-zone faceoff or special teams happened and he probably lost out on about five shifts that he was called for.”

After signing an Amateur Tryout Contract with the club on Thursday, Conacher got in two practices with the team on Thursday and Friday before dressing for last night’s game.

“I was excited earlier on, but as it got closer [to game time], I started to get a little nervous,” Conacher said. “But after I got that first shift underneath the belt, I got a little more comfortable and for the rest of the game I was having fun… overall it was a good first pro game for me.”

Conacher finished the night with a minus-1 rating and was officially credited with one shot on net, although he appeared to have three. His first shot was a backhand in the first period that seemed to catch Lake Erie goalie Jason Bacashihua off guard, but he was able to knock it into the corner.

In the second period, Conacher hopped off the bench and ripped a one-time snap shot from the top of the circle that Bacashihua was just able to get a piece of with his right arm. Later on the shift, Conacher collected a long rebound and took a wrist shot that Bacashihua saw all the way.

Weber acknowledged the shot count may have been a little low, which credited the Amerks with only 13 shots in regulation.

The goal against that Conacher was on the ice for was Lake Erie’s first goal of the night, 12:27 into the first period. He had just hopped off the bench and made his way into the defensive zone when the rebound was put into the back of the net. “You can’t blame him coming off the bench in that situation,” Weber said.

Conacher became the second Griff to make an appearance with the Americans, the farm team for the NHL’s Florida Panthers, after Carl Hudson played 12 games with the team last season. Conacher said he had been in touch with Hudson about what to expect at the next level.

“You don’t have as much time as you think,” Conacher said, citing the biggest difference between the AHL and Canisius’ Atlantic Hockey Association. “You have to be able to make a play before you even get the puck. It’s a lot faster. Guys are obviously smarter and they know where to be and they’re in the right positions, so you got to make some good moves and you got to think fast in order to get the puck out of your zone.”

As part of his tryout-based contact, Conacher expects to stay the weekend with Rochester before heading off the play with the Cincinnati Cyclones of the East Coast Hockey League, one step below the AHL. There he will reunite with Hudson and will stay with the club throughout its playoff run. Weber said Conacher will play for the Americans tonight when the team takes on the Syracuse Crunch.

Under his deal, Conacher said his expenses are being paid for by Rochester, “but that’s about it.” That may change when he goes to Cincinnati; the ECHL’s website lists minimum rookie salary at $370 per week.

Conacher, a senior in his final semester at Canisius, said he “definitely” plans on finishing his degree. He is working closely with his professors and Canisius’ academic advisor for athletics, Lynsey Miller, to try to plan something out where he can finish the last few weeks of his classes online. Driving back to Buffalo once or twice a week to get work done or attend class is not out of the question either.

The ending to the game — a 3-2 overtime loss — may not be the one Conacher wanted for his first pro game, but it was still a night he will never forget.

“The support from my friends and family is awesome. That first shift was very special to me, and I’m sure [it was] to my family and friends. That was the biggest moment of my hockey career thus far,” he said. “This is my dream to play at a level like this… it’s going to be an experience that I forever remember.”