ROCHESTER — Canisius College and Niagara University were two of four Atlantic Hockey schools that met with Central Collegiate Hockey Association executives in July about the possibility of switching conferences, but with the stability of the CCHA in question, that move is seeming less and less likely.

AHA commissioner Bob DeGregorio said Tuesday that he isn’t worried the teams will leave his conference.

“Based on what I heard there… I think that everybody’s going to stay right where they are. … I have the confidence that the issues the league has to deal with will be addressed by the directors as we move forward. I think that we will stay at 12 teams and continue to be a very strong conference and get better as we move down the line.”

The main perk of moving to the Central Collegiate Hockey Association is the increase in scholarship players allowed on the roster — CCHA teams may award up to 18 scholarships while Atlantic Hockey limits its members to 12.

Frank Serratore, head coach of reigning champion Air Force who flew in from Colorado for Atlantic Hockey Media Day, said he understands the competitive aspect of schools who look into switching conferences and has no problem with it.

“You’ve got to do what you feel is in your best interest. Those programs have operated up front and the league knows that they’re talking to different people. They’ve ultimately got to make a decision like everybody will.

The CCHA currently has 11 members that include national powerhouses like Michigan and Notre Dame, both Frozen Four teams a year ago. However, when the new Big Ten and National Collegiate Hockey conferences rock the landscape of college hockey in 2013-14, the CCHA looks to be the hardest hit — at least seven members will be defecting for the greener pastures of the new leagues and the mighty Western Collegiate Hockey Conference, with even more departures likely. 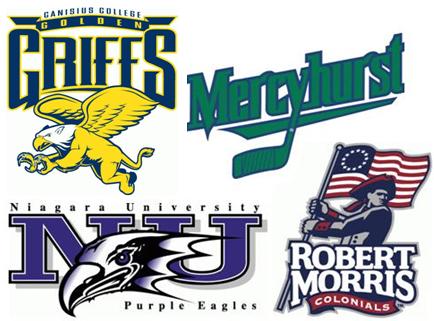 It’s the shaky foundation of the league that is keeping the prospective teams — Canisius, Niagara, Mercyhurst and Robert Morris — at a distance from the once-prestigious conference.

“As of today, only two teams currently in the CCHA – Notre Dame and Bowling Green – have committed to league membership past 2014 and BGSU has been extended an invite to the WCHA. To that end, we are not considering any move to a league that may disband,” Niagara Athletic Director Ed McLaughlin said via email.

Canisius Athletic Director Bill Maher chose not to comment further for this story, only reiterating the blanket statement the four schools jointly released following their July meetings with the CCHA.

If the four teams were to leave Atlantic Hockey, DeGregorio said the league would not immediately look to add replacement teams, but it wouldn’t be out of the question.

“What I would urge the directors to do is always keep the door open,” DeGregorio said, adding that the league would take interest if schools like Rhode Island, Navy or even the University at Buffalo added Division I programs. “If they were to leave, we’d be at eight, [a] very workable number. … My urge to the directors would be to take the eight, redo the schedule, redo the playoff format.”

The vastly depleted CCHA would then add the four AHA teams to its remaining two schools, just meeting the NCAA’s minimum requirement of six teams for a conference to qualify for an automatic bid to the NCAA Tournament. For the four Atlantic Hockey schools, that would mean 60 percent of their “new” conference schedules would be against teams they already compete with.

Further complicating matters is the commitment Atlantic Hockey teams have to the conference. Per league rules, teams would have until June 30, 2012 to give notification that they plan to leave. But that is a two-year notice, DeGregoiro said. The soonest any team could leave the AHA would be for the 2014-15 season.

If a team wanted to leave sooner — say, for the 2013-14 season when the NCHC and Big Ten start playing — it would need to pay the Atlantic Hockey Association a cash buyout. DeGregorio couldn’t say how much the buyout would cost because it is determined by a formula, but if schools hopping leagues for football give any indication, the cost could very well be in the millions.

If either Canisius or Niagara chooses to stay, it is likely the other will do the same. At least for right now, it appears that Niagara is leaning toward remaining a member of Atlantic Hockey.

“Any chance to improve our program is attractive but we like the rivalries we have in Atlantic Hockey,” McLaughlin said. “We look forward to helping Atlantic Hockey grow.”

One thought on “Atlantic Hockey commissioner not worried about CCHA”