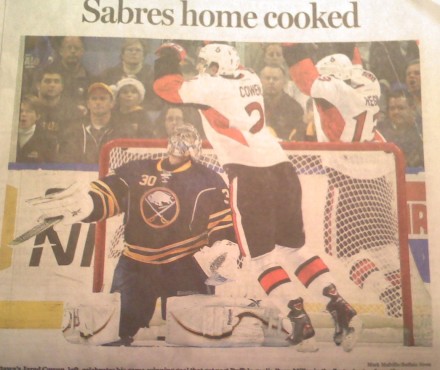 I like looking at people’s faces in the stands when I look at the pictures in sports section. The photographer is going for the action, but the people in the background help tell the story, giving instant feedback to whatever happened a split second before the shot.

The picture in Wednesday’s sports page has Ryan Miller looking up, probably swearing in his head, while Jared Cowen and Peter Regin celebrate their overtime winner.

The people in the stands are captured seconds after witnessing a defenseman sneak in from the point and release an uncontested shot that gave the Sabres their eighth loss in their last 11 outings.

The guy in the yellow hat is my favorite. He doesn’t have any outward display of emotion but you know he’s angry. His eyes are already cast off into the distance and his face tells you his thoughts aren’t fit for print.

The little boy over his left shoulder wears a Sabres-themed Santa hat and leans in for a better look. He seems caught off guard — the goal came only 45 seconds into overtime, after all — and a little upset that his hometown heroes had been defeated.

Cohen and Regin are about to skate past the boy and meet up for a celebratory hug, but right now their exuberance is separated by Miller and the goal. They wear bright white sweaters and have their arms up in victory, but space between them shows a stark contrast: in the shadows sits a goateed man with a shirt so dark you can hardly make out the logo. He shows no emotion but wears a rock-hard stare, perhaps aimed at Miller, who has now lost more games this season than he’s won.

Everyone in the stands has an angry look on his or her face. That will happen when you leave people wide open in front of the net. 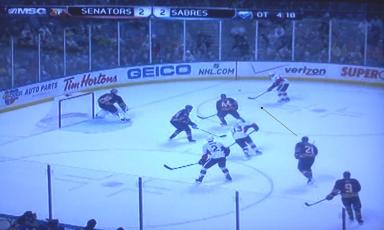 I’m not sure what Drew Stafford was doing in overtime. Just count the players in front of you and assess the situation. Instead, he gets major puck focus.

It’s 4-on-4.  Stafford (21) let his man go to the net and watched the puck instead, apparently deciding two defensmen could handle three attackers. Andrej Sekera (44) is the only player allowed to be watching the puck because his man, Erik Karlsson, has it. Robyn Regehr takes a peek back at the play and picks up Regin (13) when the pass came across. Derek Roy (9) is also watching the puck and doing nothing, but at least he could claim to be covering the point, where his man, Jason Spezza, curled.

The only guy not doing a thing is Stafford. So what if he’s at the end of his shift. He lets his guy go, curls away from the net at the hash marks and stands and watches the play happen without even attempting to pick someone up. That’s a good way to get your name in the headline of a Bucky Gleason column.

The Sabres got caught watching the first goal too. It was a crazy series of bounces but somebody has to pick up the man in front. Forget the puck, find a man.

Again, it was Regehr and Sekera on D, and they could hold hands from where they were standing in front. Neither one thought to pick up Milan Michalek (9), who came into the game tied for the league lead in goals. They should probably know where he is on the ice.

Jason Pomminville skated in circles as Senators passed around him and Paul Szczechura (not pictured) gave Spezza enough time to find a man wide open in the slot. Thomas Vanek, meanwhile, saw Ottawa shooting and thought it would be a good idea to hang out by the point. He barely got back into the screen for the goal. Miller got drawn too far out of the net and gave Michalek the whole net to shoot at … give a pro 3,456 square inches to choose from and he’ll hit one.

If you can’t protect your own net you better be able to score a bunch of goals. The Sabres were lucky to come out away with a point. The offense scored two quick goals towards the end of the first period but struggled to put together a consistent forecheck. The power play didn’t do much, now 0 for its last 11.

Szczechura finished his goal nicely, taking the puck to his backhand and roofing it, which was good because it wouldn’t have gone over well if he didn’t. The guy playing in his fifth game with the Sabres gets a pass in front of the net, has an uncontested 2-on-0 with Thomas Vanek, and keeps it. Tyler Ennis’ goal was the result of a nice passing play that salvaged Stafford and Roy’s day as he faked Craig Anderson down and put the puck in the open side.

Pretty goals are great but they count the same as ugly ones. We’ll see if players are willing to take the punishment in front of the net — ours and theirs — Friday night when the Maple Leafs come to town. If not, there are going to be a lot more unhappy faces inside the First Niagara Center.

Also, great tweet from something that happened during the broadcast.

Watching the #Sabres. Broadcast in a microcosm: RJ: The washout sign means no goal! Harry: Or safe. Ray: Or my wife saying there's no dinner

Rick Jeanneret gives you the facts in an excited manner, Harry Neale says something that isn’t necessarily relevant to the conversation and … well, that’s Rob Ray being Rob Ray.

One thought on “Puck focus”