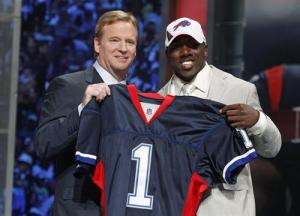 C.J. Spiller goes against an older version of himself this week in Miami's Reggie Bush. Hopefully Spiller will turn out to be a more productive NFL runner.

I wrote earlier this year about how Miami week doesn’t matter anymore. The most telling sign of all is that this year’s home game against the Dolphins won’t even be televised because the team couldn’t sell out the game.

It’s pathetic really, but empty seats may be the only way to get any results from our penny-pinching owner. Even mother nature isn’t acknowledging this rivalry — forecast for kickoff is mostly sunny and above freezing.

I find it hard to pick the Bills to win against anyone right now, but wouldn’t it be typical us to somehow pull out a win in a meaningless game and lose draft position? I guess it’s a lose-lose situation. Such is life when you’re a helpless football team.

There are more interesting games to talk about tomorrow. I’m interested to watch Denver vs. New England. Does Tebow have a shot against the Patriots’ league-worst secondary? I’m using this game as a barometer for him — if anyone can solve a good story and crush it, it’s the Hoodie.

Plus it’s fantasy playoffs week. I have two semifinal games to keep track of and it’s not looking good for either of them. Tony Romo is killing me! (But I did pick the Cowboys to win ahead of time.)