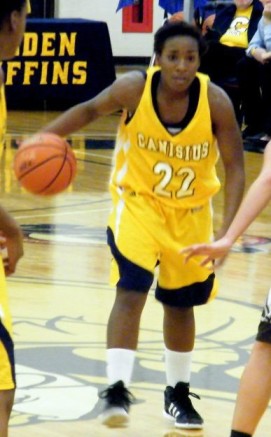 You might as well call it a Kid’s Day miracle.

The Canisius women’s basketball team trailed by 14 points in the second half but stormed back to tie the game on an Allison Braun jumper with five seconds left and then won it in overtime in front of 2,196 screaming Buffalo public school children Monday afternoon, all of whom received free admission as part of the annual Kid’s Day promotion.

Canisius didn’t have the lead for any of the regulation period but never trailed in overtime as 29 points from Ashley Durham and a late surge from Jamie Ruttle lifted the Griffs to a 85-74 win, much to the delight of the screaming  fans who may never have a better school day the rest of their lives.

“I feel like the kids definitely give us an extra energy that we need, especially being down 14. It’s like you don’t want to disappoint them,” Durham said.

“That’s a really great thing for women’s basketball because we get a feel of what it’s like,” Canisius coach Terry Zeh added. “You want to know why Duke wins every time on [its] home court? It’s because they get that every night.”

Iona coach Anthony Bozzella and his Gaels have had more than their fair share of feeling “what it’s like” this season – this was the third time just this year that they were scheduled as the Kid’s Day opponent, losing all three.

The 14-point comeback matched the largest of Zeh’s career, a 70-60 win over Maryland-Eastern Shore in December 2007. The Griffs trailed 40-26 at halftime in that game but had the entire second half to mount the comeback. Monday afternoon, the deficit was still 12 points with just over seven minutes to go.

“I try not to [think about it],” Zeh said. “We just kind of want to have our heads down and keep grinding. If you’re down 30 or up 30, you should just try to continue to play the same kind of basketball that you want to play.”

The Griffs’ leading scorer, Jamie Ruttle, was held without a field goal for the first 31 minutes of the game but turned it on late, adding eight points before the end of regulation and seven more in overtime to seal the deal.

Ruttle hit two free throws to open scoring in the overtime session, giving Canisius its first lead of the day, and Durham hit a 3-pointer 40 seconds later put Canisius up five. Then Ruttle hit a jumper and Jen Morabito got a runner to fall to give Canisius a 9-0 start to overtime as Iona missed its first five shots.

According to Durham, the most important thing for her team was “believing in each other.”

“We trust each other to another level,” she said. “We’re really close. We can tell each other stuff during the game and say ‘you did this wrong and you need to change it’ and we take it the right way.

“Trusting each other makes it easier … I trust when I dish them the ball that they’re going to make it every time.”

Durham’s career-best 29 points that led the comeback stole the spotlight and headlines from Iona’s freshman guard Damika Martinez, who hit 10 of 17 from the floor for 28 points, giving her consecutive 28-, 29- and 28-point performances in her last three games.

The Griffs are now 8-7 overall and 2-2 in MAAC play. The team has also won eight of its last 10 Kid’s Day games at the KAC, with one of the losses coming last year at the hands of the nationally-ranked Marist Red Foxes.

The final seconds of regulation were crazy. After an Iona timeout, the Griffs let Damika Martinez get open right under the basket and she converted the layup to put the Gaels up 67-65 with 13 seconds left.

Terry Zeh joked after the game that letting her score was exactly what his team wanted to let her do so it would have enough time to come down the court and make a shot without any timeouts.

Durham had the hot hand but couldn’t get free, so she turned and passed to Allison Braun, open from about 15 feet out.

“Everyone asks what I was thinking when I took that shot, and I think most answers you find when you ask players that happens to is ‘nothing,’ ” Braun said. “It’s just simple thoughts, what did they give me, am I open, and knock it down.”

“Ashley made me feel calm. I think that’s the most important thing with a point guard is you should make your players feel calm, and that’s what happened today. She gave me confidence to shoot that, really.”

Iona’s Aleesha Powell raced down the court to try for a buzzer-beater but had her shot blocked by Melissa Gardner, who didn’t get off the bench in the first half but played strong in the second half and overtime.

It took the Griffs 40 minutes and 49 seconds to take the lead, but once they got it they held it the rest of the game.