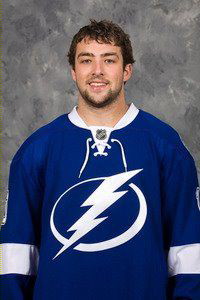 Conacher dressed for Tampa and scored a goal during the preseason.

News was leaked Wednesday that the posterboy of Canisius hockey had a deal in the works and the Lightning made the official announcement Thursday afternoon.

“When we did hear about it, obviously it was awesome and we’re so proud. Nobody deserves it more than him,” Canisius hockey captain Scott Moser said over the phone Thursday night. “It’s more than just somebody signing a contact; it’s a great story for everything from what he’s had to fight through with his medical condition (Cory has diabetes) and even just his size and then coming from a small school, it’s a great story.”

Conacher spent this season with the Norfolk Admirals, the minor league affiliate of Tampa Bay. He is currently third in scoring in the AHL with 64 points (30 goals, 34 assists) through 57 games played. He was named a starter for the East in the AHL All-Star Game last month, where he scored two goals and added an assist.

“Soo many people to thank,” Conacher (@conhockey19) tweeted last night. “Coaches, past players/teammates, uptownsports (the agency that represents him), friends, and most certainly my family.

“Love all you guys and wouldn’t have been able to do it without you guys. Half way there! Next step is to make it.”

Conacher, the man who could always be found stickhandling in his dorm room, graduated from Canisius last spring and left the school with 12 hockey records, including career marks for goals, points and game-winning goals.

Moser said Conacher’s story gives reassurance to programs that don’t get a lot of national recognition.

“There’s always people that may doubt maybe the size of the school and the conference, but Cory’s proof that if you have the skill, scouts will find you and if you want to play Division I hockey, anywhere you play there’s going to be scouts. I think it says a lot about where the league’s going but also our program, that he’s able to improve that much year-by year and get noticed by scouts at the highest level.”

“He turned into my richest friend overnight, that’s for sure,” Moser cracked. “Cory’s definitely doing well for himself but I know this is just a stepping stone for him, this is just part one. I’m sure he’s not getting too far ahead of himself right now. He has his head on straight and he’s focused.”

Conacher’s contract is a two-way deal, which means he is eligible to play in both the minors and the NHL. Whether he actually plays with the Lightning is up to management. His previous contract only allowed him to play in the AHL.

Tampa Bay made two moves at the deadline, acquiring a depth forward and defenseman along with two draft picks. Tampa is also dealing with several injuries, including one to top center Vincent Lecavalier, who is out until at least mid-March with a broken hand.

Tampa Bay is currently fourth in the Southeast Division and tied with Buffalo in the conference standings, with 64 points through 63 games. Buffalo plays at Tampa on March 19.

“Just to say that I was a linemate for a while with someone who’s an NHL player now is pretty awesome,” Moser said, “especially Cory – I wouldn’t have picked anyone else.

“I’ll be sitting down and be like ‘yeah, I played on that kid’s line.’ I’d be honored to say that I played with Cory.”

3 thoughts on “Former teammate on Conacher: ‘Nobody deserves it more’”