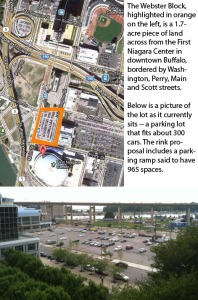 The Buffalo Sabres development proposal for the Webster Block was given the go-ahead Wednesday from the City of Buffalo. Team owner Terry Pegula’s $123 million “HARBORcenter” includes a hotel, sports bar, parking structure and a dual-surface ice rink that will likely be the future home of Canisius’ Division I hockey team.

Canisius has been pondering an on-campus ice rink for years and was in talks with the Sabres last summer about the possibility of building a rink next to the school’s Koessler Center that would double as a Sabres practice facility. With a number of factors in play — including Canisius’ $68 million Science Hall project in full-swing — the talks never amounted to anything substantial.

But when the Webster Block — located directly across from the First Niagara Center — became an option, the Sabres pursued it aggressively and Canisius stayed along in discussions. No official contracts have been signed yet, “Just what I would say good conversation … of a shared opportunity for both of us,” Maher said.

Canisius currently rents ice from Division III Buffalo State, located just a few minutes down the NY-198 Scajaquada Expressway. While the Webster Block is actually farther away from the Canisius campus than Buff State in terms of mileage, it’s closer to the prestige of a Division I facility.

Like the setup at Niagara University, the HARBORcenter calls for one feature rink with seating for around 2,000 while the other surface seats only a few hundred.

The groundbreaking of the project is set for March 1, 2013, with the ice rinks and parking structure said to be ready for use by September 2014.

Maher wouldn’t say that the Griffs will be facing off downtown in 2014 just yet, but added, “if their timeline is 2014, we’d love it.”

Buff State officials chose not to comment for this story because Canisius has not yet notified them of any formal changes, but a Buff State spokesman said the school’s partnership with Canisius is on a “year-to-year basis,” not a formal contract that locks the schools in for a set number of years.

“Buff State’s been a great partner for us,” Maher said. “If we have to continue playing at Buffalo State, we will. If there’s an opportunity for us to upgrade our hockey situation and a new facility helps us do that, we’re certainly going to do that. … it’s the right next step for our hockey program if we can make it work.”

One thought on “Canisius planning to play at Webster Block”