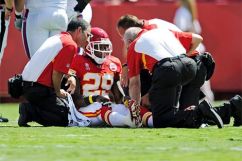 The Buffalo Bills’ Week 2 home opener against Kansas City is a game most fans had circled as a win before the season.

It’s only one week into the season and the Bills have the same record as teams like the Giants, Saints and Packers right now, but there’s not a lot from last week to build on. Ryan Fitzpatrick threw passes like his ribs were still broken, Mario Williams blitzed like he had all $100 million of his salary in quarters strapped on his back and two offensive starters were lost to injury.

Chan Gailey and the Bills have plenty of time to right the ship on the 2012 season, but nothing they did last week would indicate they can win Sunday by at least a field goal. I could see the Bills pulling out a close one, but until I see further evidence, I’m taking the points.

–This Bills are accomplishing the rare right now of leading the NFL in both rushing yards per game and points allowed. That’s including the early game this week.

–Yes, the Bills beat the Chiefs last year 41-7. That’s means … very little. If calling up past success was that easy, the Bills would be 1-0 after Fitzpatrick led the attack over the Jets last week.

–Storyline to watch in this game is Eric Berry on Stevie Johnson. Johnson ended Berry’s season last year on a run block. I’m willing to bet Berry hasn’t forgotten about that.