DETROIT – Billy Baron read an article online last spring about Ray McCallum Jr., who, after passing up offers from UCLA, Florida and Arizona, was making a trip to the NCAA Tournament with his Detroit Titans and their coach, Ray Sr. Intrigued, Baron logged onto Facebook and sent McCallum a message looking for advice.

Baron transferred from Virginia to Rhode Island midway through his freshman year to try to accomplish the same thing with his father, Rams coach Jim Baron. When Jim was fired last March and hired a month later by Canisius, Billy had a choice: Go play for a school with national exposure in a power conference, or go down a step and play for a mid-major to stay with his dad. So he asked the player who would know best. 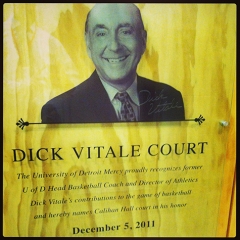 Detroit’s court is named after its former coach, Dick Vitale.

McCallum was sympathetic for Baron’s situation – and offered the encouragement he needed to hear.

“He was in a tough situation,” McCallum said of Baron. “I just told him that you can’t go wrong with your dad. That’s what I did, and he always has my best interests in him, and I felt like his father would have the same in him. I told him go wherever your heart says to go. I don’t think you can go wrong staying home and playing for your dad.”

Baron, of course, chose to stay with dad and has quickly put Canisius into NCAA Tournament conversation as the new favorite to win the MAAC.

But Sunday in Detroit, when the Barons and McCallums squared off in the only meeting of father-son teams the country’s 347 Division I programs will produce this season out of roughly 5,000 games, it was the McCallums that proved to be superior.

Ray McCallum Sr. looked confident as Ray Jr. made seven free throws in the last minute of the game to hold off Canisius, leaving Jim Baron frustrated and Billy Baron bruised as they walked off Dick Vitale Court on the wrong end of an exciting, 83-78 finish.

Baron and McCallum, both 6-foot-2 junior guards, matched up against each other at the start of the game. Detroit jumped out to an early lead while McCallum created the highlight-reel play, setting up Doug Anderson for a monster alley-oop on a spurt that pushed the Titans ahead 31-19.

Canisius switched up its matchups to counter, bringing Reggie Groves in and putting Harold Washington on McCallum while Baron shifted to Jason Calliste. The Griffs stormed back into the game, finishing the half on a 23-8 run to go from 12 down to three up at halftime, 42-39.

But the second half belonged to Detroit, which had the big shots when it needed them and forced Canisius into 23 turnovers before closing out the win with clutch free throws.

Both Barons said this was the first time they had played another father-son team. The McCallums played Ernie and Trey Zeigler’s Central Michigan team two years ago, winning 75-49. But it wasn’t the same as playing Canisius.

“I played against Trey Zeigler when we were both freshmen, but he wasn’t really a point guard so we didn’t really guard each other,” McCallum said. “But now this time I [went] up against another point guard who is a coach’s son, and that’s something I’ve never experienced.”

(Zeigler later transferred to Pittsburgh after his dad was fired and helped set the precedent that allowed Baron to play this season without sitting out a year; Ernie did not immediately find another job. Billy Baron also reached out to Trey for advice and even tried to get him to come to Canisius. “Almost made it happen,” Baron said, “but it didn’t work out.”)

Baron was already getting ice in the locker room when Coach McCallum went over to the press table and grabbed the microphone to thank the fans for helping his Titans beat Canisius – a team, he told the remainder of the 2,717 in attendance, that will be playing in the NCAA Tournament come March.

How the team will hold up through conference play and especially into the MAAC Tournament under a first-year coach remains to be seen, but things are looking good so far for the Canisius team that continues to plow through school records. And if there is anyone’s seal of approval that’s required for a mid-major in this situation, it’s McCallum’s, who accomplished the feat just last year.