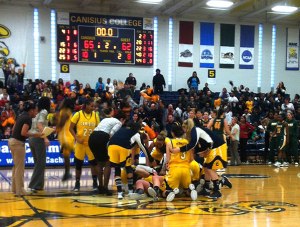 The team piled on Mills after the shot went in.

Two thousand school children roared for Tiahana Mills as she ran down the court as fast as the legs on her 5-foot-5 frame would take her. The freshman dribbled four times as the clock ticked from three seconds down two and then one.

Mills took one last stride and launched a half-court shot fractions of a second before the buzzer sounded and was pummeled by her teammates after the ball banked off the glass and went in, giving the Canisius women’s basketball team a 65-62 win over Siena Friday in another wacky and wildly exciting Kid’s Day at the Koessler Athletic Center.

Kid’s Day games are always something special, and Mills’ buzzer-beater ranks Friday afternoon’s game as the best finish I’ve seen in my four years at Canisius.

Mills said her high school teammates used to put up half-court shots after practice and she once made one before halftime of an AAU game, but this was her first true buzzer-beater.

“Its amazing. When the team fell on me at half court, I never had that before,” Mills said.

Here’s a look back at the Top 5 best finishes I’ve seen in four years at Canisius:

Canisius hockey beating RIT last year is one of the most memorable games I’ve ever covered. Canisius and RIT do not get along, and it only made it worse that RIT always won.

The Tigers had beaten Canisius eight straight times by a score of 39-10 going into that game. Buff State actually went quiet when Scott Moser scored on a 2-on-1 with five minutes left to put the Griffs up ahead because it was mostly RIT fans making the noise that night. Kyle Gibbons sealed it with an empty-netter and Dan Morrison made 33 saves for the first win over the Tigers since Feb. 10, 2008 (the return game in the home-and-home after the RIT brawl game).

Last year’s Kid’s Day game was just as exciting as Friday’s. Allison Braun tied the game on a jumper with five seconds left and the Griffs pulled away in overtime to complete the comeback against Iona, which led by 12 points with seven minutes to play. Kid’s Day magic.

Gaby Belardo went coast-to-coast and got a floater to fall with 11 seconds left to give Tom Parrotta his first-ever win over Siena. This matchup was the basketball equivalent of hockey’s rivalry with RIT: a team Canisius always got physical with but could never beat (thanks go out to Rob Goldsberry for the chippiness). The sugar on top was Siena’s Ryan Rossiter — a likeable-enough guy off the court, but the biggest pain in the butt on it (oh and repeat MAAC Player of the Year) – had it shot swatted by Tomas Vazquez-Simmons at the buzzer.

Ashley Durham dribbled through most of Niagara’s team and got a layup to fall with less than one second left to give the Griffs a win at Niagara. If you liked Griffs’ play-by-play man Mike Scott’s call Friday (which got some love at Awful Announcing), you’ll appreciate his call from the Gallagher Center.

Canisius outscored Niagara 11-8 in overtime in the first sellout game I had ever covered. Canisius led by eight points with four minutes to go but didn’t score the rest of the way as Niagara forced overtime.

Canisius had a chance to win the game on the last possession of regulation. Parrotta cleared everyone out of the way for Frank Turner to drive the lane. Joe Mihalich instructed three of his bigs to clog the key and left the other guys more or less open, expecting Turner to keep the ball in his hands. Mihalich won that battle but lost in overtime. The KAC was nuts that day.