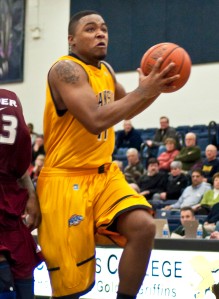 Alshwan Hymes was suspended for Saturday’s game and possibly longer. He is second all-time in three-pointers made by a Griff. More below.

After an 0-fer night Thursday, Isaac Sosa rebounded with five three-pointers to lead Canisius past Marist, 73-64, Saturday in the Koessler Athletic Center to break the Griffs’ first losing streak under Jim Baron.

The win, Baron’s 399th as a Division I coach, kept Canisius on par with Niagara atop the MAAC standings and doubled its win total from last season.

“I was just ready,” Sosa said. “To be honest, I didn’t worry about [last game]. It’s not like any of us had a good game; we really struggled on Thursday. I was just being myself, being aggressive and letting my shots fly.”

Sosa led the Griffs with 22 points and jump-started the offense in the second half with four three-pointers in a two-minute stretch. Billy Baron had a double-double with 17 points and 10 rebounds and Chris Manhertz nearly matched the feat, collecting 14 rebounds and adding nine points. Canisius never trailed in the game.

Chavaughn Lewis had 24 points to lead Marist, which dropped its fifth-straight contest and fell to 4-11 (1-3).

Jim Baron said his team was out of focus after Thursday’s 66-45 loss to Fairfield and Harold Washington said the Griffs “needed to get smacked.”

Washington said Saturday the players talked some things out after the loss and “needing to get smacked” is over.

“We all got together and talked about how we needed to step it up on both sides of the ball,” Washington said. “Communicating, just the little intangibles. I think that’s what was missing last game. We didn’t box out, we weren’t scrappy. I think we came out and did that [Saturday]. Chris came out and did that tonight. He was an animal on the boards.

“… I think we definitely learned our lesson from last game. Instead of coming out and being the hunted, we wanted to be the hunters. We want to go out and strike first. We put some pressure on teams like they do to us. So yeah, I think we’re done with that.”

Washington said the meeting was informal but didn’t say if it included senior guard Alshwan Hymes, who was suspended indefinitely from the team sometime between Thursday’s game and Saturday’s.

Sources said Hymes was suspended after he had some choice words for coaches during a practice, presumably about his diminished role on the team. Hymes also retweeted a tweet from former Griff Julius Coles shortly after Thursday’s game, which asked why “this bum a— coach” wouldn’t put Hymes in (he played only three minutes in the first half and not at all in the second half). His future with the team is uncertain.

Jim Baron didn’t add anything in the press conference and said he didn’t know how long Hymes would be out for.

Canisius’ next game is Friday at Siena, which has lost 10 straight.

–Hymes also missed the first half of the Syracuse game earlier this year due to suspension. Reports said he missed team curfew.

–Marist junior forward Jay Bowie missed his third-straight game due to a head injury. He had 14 points in the teams’ December meeting. Red Foxes’ coach Chuck Martin said he is day-to-day.

–Freddy Asprilla stepped up when both Heath brothers picked up two fouls in the first half. He scored on a spin move and came back to block on a shot on consecutive possessions, finishing with four points, four rebounds and two steals in 10 minutes. He also had four fouls.

–Canisius has won five straight against Marist at the Koessler Center.

–This was the fourth time this year Chris Manhertz was within two points or rebounds of a double-double.

–Attendance was 1,401 in the final game of Canisius’ winter break promotion, which allowed students to bring a guest for free.