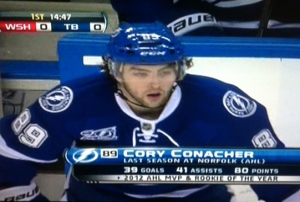 Canisius grad Cory Conacher had a goal and an assist in his first NHL game Saturday and was named third star while his Tampa Bay Lightning beat the Washington Capitals 6-3.

Wearing jersey No. 89, Conacher played left wing on a line with Vincent Lecavalier and Teddy Purcell. He was plus-1 with two shots on goal in 13 minutes 50 seconds of ice time, including 4:42 on the power play. He was not credited with any hits or blocked shots and did not take a penalty.

Conacher’s goal gave Tampa some late insurance, putting the Lightning up 5-3 with 6:36 left in the game. Conacher and Purcell had a 2-on-1 against Mike Green when they caught the Capitals on a change. Purcell made a nice move and then sent a pass across for Conacher, who shot a one-timer into the top of the net, beating Washington goalie Braden Holtby. [VIDEO]

His assist came in the second period on Tampa’s third goal. Conacher knocked the puck away from Green (apparently his favorite NHLer to pick on) and right to Lecavalier in the corner. Lecavalier sent a perfect pass to Martin St. Louis, who redirected the puck into the corner of the net. [VIDEO]

Conacher was the television interview guest on Sun Sports during the second intermission. They gave him the puck his first assist was allegedly recorded with.

Conacher’s “Welcome to the league, rookie” moment came with 4:30 left in the first period when Alexander Ovechkin leveled him at center ice. Conacher skated the puck up on a power play and had just let go of a pass when Ovechkin caught him. It earned a few replays in the game but Conacher bounced right back up.

Conacher told NHL.com Saturday was the best day of his life:

For Conacher, skating on a line with Lecavalier and Purcell, his debut was a magical night.

“This was the best day of my life,” Conacher said. “I’m not married yet, but for sure this is a dream come true. Just to be at camp was a dream come true and to be in the same locker room with guys I have idolized all my life is amazing. It’s very awesome.”

“He fits right in,” [Tampa coach Guy] Boucher said. “This guy is ready. It’s not a project, he’s ready to go. His speed, he made some terrific plays, scored a goal and deserved it.”

Here’s video of Conacher after the game from Tampa Bay Online.

Tampa’s next game is Monday at the Islanders. The Lightning play at Buffalo April 14.