Billy Baron is the best thing to happen to Canisius basketball in a long, long time. But determining his place in Canisius lore is strictly a matter of opinion.

Baron is perhaps the best player the Griffs have had since Sugar Ray Hall, the school’s all-time leading scorer (2,226 points) who graduated in 1985. You could argue that Baron belongs on the short list of Canisius’ all-time greats, or make a case that he barely cracks the top 15.

“We haven’t had this much excitement about a Canisius team or a player in years. I really respect what the guy is doing,” Hall said. “I think he’s a hell of a player. He has all the tools that are necessary to go to the next level. I feel good about it. I’m really happy to see they finally got somebody over there to really challenge what I did when I was there. I’m totally excited about it, I have nothing but good feelings for him.”

Hall may love what the kid has done, but in determining Baron’s legacy, he doesn’t want people to forget their history.

“One thing he has in his favor is that he’s playing right now. Everything that people remember is going to be current. A lot of folks forget what has happened in the past,” Hall said.

“So if he’s the greatest in 28 years, or if you want to say, ‘hey, he’s better than Ray Hall, he’s better than Larry Fogle,’ once again that is someone’s opinion. Obviously everybody is going to have their opinion.” 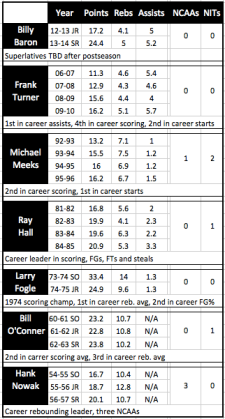 While times have been tough recently, Canisius basketball has a rich history. At the right is a chart of Griff standouts, one per decade, provided for the sake of comparison. But even that list isn’t complete with all of Canisius’ former stars.

Here’s what we know about Baron:

In just two seasons, he has vaulted up to 11th on Canisius’ all-time scoring list and is within striking distance of the top 10.

With 19 points and seven assists in the postseason, he can become just the second player in school history with 1,400 points, 350 assists and 300 rebounds (Craig Wise is the other).

If Baron ever appears in an NBA game, he will be just the 12th Griff to play in the NBA or ABA and the first since Mike Smrek retired in 1992.

Of course, none of that helps you definitively say whether Baron is the best or the fourth-best or the 15th-best player Canisius has ever had. But if you’d like to start at the top of that list and work your way down, Hall made that easy for you.

“I tell people, I’m the all-time leading scorer at Canisius, but I’m no idiot. I’m never gonna say that I was better than Larry Fogle,” Hall said. “Larry Fogle played two years at Canisius … and that’s when Canisius was really on the map. That’s when Canisius was big time. This guy did it when it was big time. People forget about Larry Fogle because of what happened off the court*. That’s off the court. What he did on the court is what you should judge a person on. If you look at his numbers and what he achieved in the small amount of time he was there, you have to consider that guy is one of the best players, if not the best player.”

Again, you are free to rank Baron wherever you’d like in your head. Hall just asks that you keep in mind what former players have done, too.

“I’m really, really happy for that young man and as long as he keeps that Canisius name going, he keeps everything that is about history [going],” Hall said. “All of the folks that you talked about … those are people you have to consider when you talk about is this the greatest player that’s ever been there?”

Hall said he went to one game this year (an 88-81 home loss to Quinnipiac where Baron had 31 points) and watched many more on television. He has never met Baron, but the 23-year-old has won his respect.

“If you talk to Billy, give him my best,” Hall said. “You can certainly let him know that I respect him, I certainly appreciate what he has done for Canisius in the two years he’s been there. He brought a dead animal back to life and I certainly, certainly enjoyed that.”

*Canisius was put on probation during the Fogle era for reportedly giving improper benefits. Fogle began his career at Southwestern Louisiana and only came to Canisius when SW Louisiana had its basketball program suspended from 1973-75 for what the Associated Press called “a record 118 violations, many of them involving gifts of money and clothing to recruits and players.” Fogle is the most prolific Canisius athlete not in school’s hall of fame.