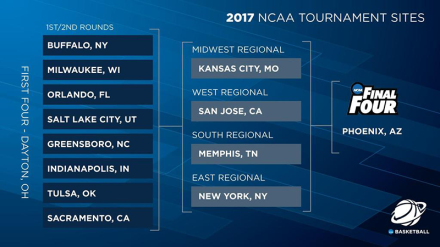 March Madness is coming back to Buffalo in 2017.

The NCAA announced host sites for the 2016, 2017 and 2018 tournaments Monday afternoon. Buffalo was awarded first- and second-round games in the 2017 NCAA men’s basketball tournament.

Buffalo will host eight teams for four first-round games. The winners will advance to two second-round games, exactly like the format of tournament games Buffalo hosted this past March.

UConn won national championships after opening in Buffalo in 2004 and 2014. Dayton upset Syracuse and Ohio State in Buffalo last year.

Dates of the games will be announced at a later date.