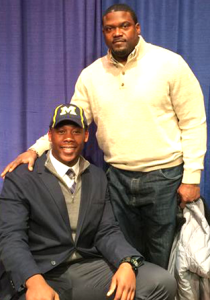 Wheatley had offers from nearly every major college football program but narrowed his decision to Michigan or UCLA. Sources close to Wheatley said he was leaning heavily toward UCLA before his father took the job at Michigan, his alma mater, in January.

“The opportunity to play big-time Division I football and still be with my family was truly a blessing,” Wheatley said after making his decision. “I think that’s what God had planned.

“At first, honestly, I think I was gonna end up at UCLA,” he added, “but then I went out and visited Ann Arbor, and I was like, ‘this is home.’ ”

Wheatley (6-foot-6, 245 pounds) was graded as a four-star tight end by Rivals and the 13th-best tight end prospect nationally. He was one of the most — if not the most — highly recruited athletes in Western New York history.

Wheatley said Michigan promised him to opportunity to try playing both tight end and defensive end. UCLA wanted him to play defense.

But that didn’t make his decision any easier. It took him until the wee hours of Wednesday morning to decide.

“I made up my mind probably around 3 o’clock in the morning,” he said. “I woke up in the middle of my sleep, called my mom downstairs, we started talking, talked to my dad, and I was like, ‘this is the right place for me.’ ”

–
Wheatley said there was no pressure from his parents about the decision.

“From the beginning, they told me this opportunity is mine,” he said. “This is my life and the next four years of my life is mine to choose.”

TJ Wheatley said he’ll be on campus at Michigan next during his February break, Feb. 16-20.