With the conclusion of the MAAC’s regular season Sunday, all seeds for the conference tournament have been set. The above bracket shows the road to the NCAA Tournament. 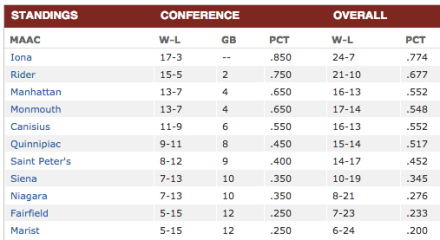 The tournament opens Thursday at the Times Union Center in Albany with three play-in games: Siena vs. Niagara at 5 p.m., Saint Peter’s vs. Fairfield at 7 and Quinnipiac vs. Marist at 9. Winners of those games will have Friday off before the quarterfinals begin Saturday.

Canisius opens the tournament Saturday at 2:30 p.m against Monmouth, which took both games from the Griffs this season.

Top-seeded Iona needs to win the tournament to advance to the NCAAs. The Gaels are not expected to earn an at-large bid if they falter in Albany. They open Saturday at noon against the Niagara-Siena winner.

MAAC all-star teams will be announced Monday during the league’s conference call, slated to begin at noon.

Quarterfinals and beyond will be on ESPN3, with the championship either on ESPN or ESPN2.

My Tweets
Join 2,100 other followers