MAAC All-Rookie selection Dominique Reid scored a career-high 24 points but ninth-seeded Niagara couldn’t overcome 9.1 percent three-point shooting in a 71-54 loss to eighth-ranked Siena Thursday in the play-in round of the MAAC Tournament.

Senior guard Evan Hymes led Siena’s balanced attack with 14 points while Ryan Oliver had 13 off the bench. Siena, the host team, advanced to face top-ranked Iona at noon Saturday. The winner of that game gets the Canisius-Monmouth winner. 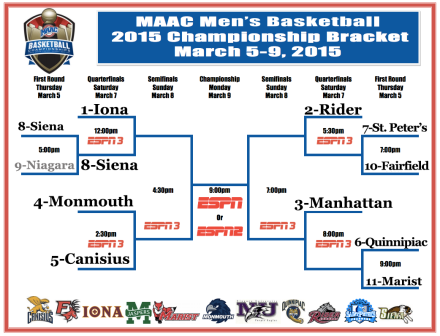 Niagara finished the year 8-22 overall — a record that was buoyed by a four-game winning streak that closed out the regular season. Niagara endured losing streaks of nine, seven and four games this year and lost 17 of its first 20 games with an extremely young team.

Niagara returns every player next season and will still only have one senior, Rayvon Harris, barring any transfers.

Leading scorer Emile Blackman scored 13 points Thursday for Niagara on 5-of-11 shooting while Wesley Myers added nine points and was the only Purple Eagle to hit a three-pointer as the team went 1-for-11 from deep. No one else scored more than four points (full box score).

My Tweets
Join 2,100 other followers