Texas A&M set an NCAA comeback record Sunday by rallying from a 12-point deficit in the final minute to beat Northern Iowa in the NCAA Tournament, 92-88, in double overtime.

The previous record for largest final-minute deficit overcome to win the game – 11 points – was set by UNLV in 2005 and matched by Canisius in December.

Here are the previous marks from the NCAA record book (which hasn’t been updated yet to include Canisius): 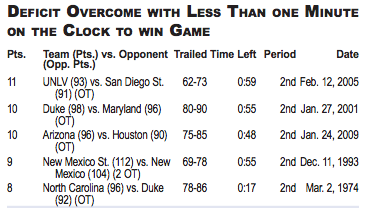 How did this happen?

The Aggies’ comeback turned out to be very different from Canisius’ comeback, which was fueled by missed free throws and clutch 3-pointers.

Jeremy Morgan hit two free throws to put Northern Iowa up, 69-57, with 44 seconds to play. Then the wheels fell off. Texas A&M ripped off a 14-2 run over a span of 31 seconds (!) before UNI missed a potential game-winning shot just before the buzzer.

The biggest factor in the Panthers’ demise was turnovers. They blew a 12-point lead without missing a single free throw! The complete play-by-play is here, but here are the highlights:

Over the final 44 seconds:

Texas A&M made the only free throw taken over the stretch, on a traditional 3-point play from Alex Caruso. Jalen Jones added a bucket and had a steal for A&M while House hit the only 3-pointer. Klint Carlson scored UNI’s only points on a dunk.

Caruso hit a jumper to tie the game with eight seconds left in the first overtime before the Aggies got separation in the second overtime. Third-seeded Texas A&M advanced to play 2-Oklahoma in the Sweet 16 while the Cinderella run ended for 11-Northern Iowa in an epic collapse.