Canisius said it didn’t have the paperwork to officially confirm Gurley’s departure Tuesday night but acknowledged he’s unlikely to return since a junior college in North Dakota has already announced his signing.

Gurley will be the third player from last year’s team to transfer. His departure will give Canisius four scholarship openings, but it needs a coach to fill them. Delaware closed its coaching search Tuesday, leaving Canisius as the only team in the country still looking for a coach.

A team source said the school expects both players Baron signed to NLIs – point guard Malik Johnson and 6-foot-7 combo guard Spencer Foley – to remain with Canisius, adding that Foley is already on campus for summer classes and Johnson is expected later this summer after his graduation.

Gurley played in 30 games as a freshman but averaged only 9.5 minutes per contest, though he was expected to see a jump in playing time next year. He hit a big 3-pointer during Canisius’ record comeback against UL-Monroe.

Here’s an updated look at the status of last year’s team: 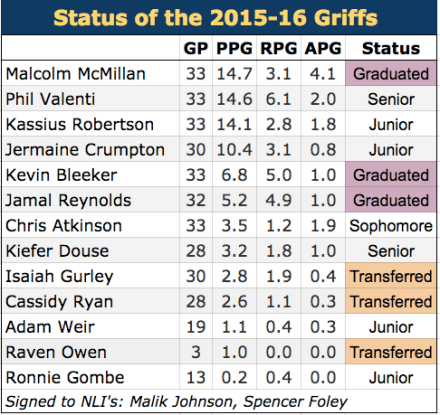