The draft is the most important part of your fantasy football season. Preparation is key. 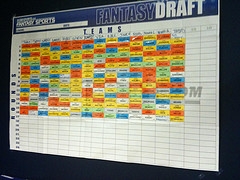 At the very least you need to look over the rankings, and not just for 30 seconds before the draft starts. Form some opinions, make a few educated guesses. That doesn’t mean saying “Matt Forte sucks.” (He doesn’t.) That means looking at some numbers and saying “Shonn Greene and Felix Jones will have a bounce-back seasons because…” (They will.)

Have a strategy. Your turn to pick will come before you know it, and there’s nothing worse than being caught off-guard and looking down at your sheet to realize you don’t like any of the next 10 names listed. Wait, names? You don’t even know what position you’re targeting. 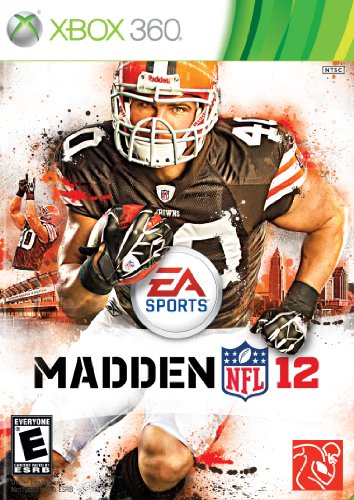 If you take a running back in the first round, are you going for another running back in the second round? The double-RB strategy that fell out of favor the last few years is making a resurgence, but that doesn’t mean it’s right for you. Do you grab Peyton Hillis in the second round or take someone else and hope he falls to you in the third? Double-up RBs with Steven Jackson or grab Hakeem Nicks? You need to be prepared for situations like these.

What if you decide to go unconventional and take a quarterback or wide receiver in the first round? Do you know what positions you need to take in the next rounds to counter for your first pick? The draft is like a game of chess in this regard: not only do you need to make the right moves, but also you must make them in the right order.

Here’s a look at several situations that will come up in your draft, loosely arranged by the order in which they will happen.

What to do with the third pick?

Usually landing the third overall pick will get you a running back you will start every week. You sit happily in your chair as Adrian Peterson and Arian Foster come off the board. History and your cheat sheet both say to take Chris Johnson without thinking twice, but the logical part of your brain makes you worry. Yeah, he’s a great talent and always puts up points. But this time next week will be September, and he still hasn’t practiced!

Holdouts suck. If you want to pass over him and take Jamaal Charles, there’s nothing wrong with that decision. You can’t win your league in the early rounds, but you can certainly lose it. If Johnson gets hurt or is unproductive, that’s a waste of your first-round pick. Charles, who averaged 6.4 yards per carry last season, is definitely the safer pick; Johnson just has slightly more upside based on his past performance. I’m hoping this isn’t a call I have to make, but I think I’d have to go with Charles.

If you have the fourth pick and are worried about Johnson, I would definitely understand if you took Ray Rice ahead of him, too. Again, it’s a call I hope I don’t have to make. If you have the fifth pick, well, that’s perfect because the decision will be made for you and you get a better pick coming back around. If you do take Johnson, make sure you handcuff him with (Michigan State product) Javon Ringer in the late rounds.

Filling a running back slot in the first round is sound fantasy strategy. Taking a quarterback is bold, and taking a receiver is very bold. Do these strategies really work?

If you read Matthew Berry’s Draft Day Manifesto (definitely read it, if you have half an hour), you know he has the hots for Mike Vick this year, suggesting you might even take him with the first overall pick.

Don’t do that. But taking a QB in the latter-half of the first round is not a bad idea. Most people have Aaron Rodgers one, Vick two. Both usually go in the first round (I’ve seen as high as third overall), but I wouldn’t pass over a great RB early.

Think of running backs in tiers. The first tier is Peterson and Foster. Johnson would be in the first tier if he was in camp all summer. Except he wasn’t, so he joins Charles and Rice in the second tier. Those five running backs are pretty consistently the top five backs drafted. Outside the top five backs, there is some variation. Rashard Mendenhall, Maurice Jones-Drew and LeSean McCoy are the sixth, seventh and eighth RBs, but in no consistent order. MJD’s stock has been falling since July. McCoy’s is up and Mendenall’s has stayed about the same. 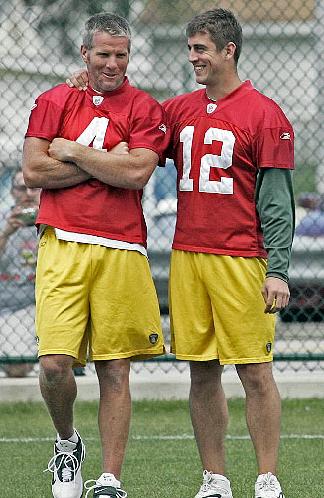 Hey Bills, see what happens when your quarterback of the future has a good mentor?

So what to do? Some people are giving up on the guessing game and taking a QB at six. I think that’s too early. Make a call on the six-to-eight group and take one of them.

After the top eight there is even more variation. Here’s where I draw the line. You might not get Rodgers at ninth overall, but if he’s there, I take him. If he’s gone I take the top-eight RB who didn’t go yet. Not until 10 do I look for Vick, who I take only if the previous nine are off the board.

Andre Johnson is a hot commodity in the first round, and even in ESPN’s latest 12-team mock draft, Roddy White went in the first round. It’s not that WRs aren’t important, I just wouldn’t take one early because it messes up your next several picks. I know waiting until ninth overall means I might not get any of the three alternatives in the first round, but I’m okay with that.

The elite QBs will be gone by the early third round. If you want one and you already drafted a receiver, you’ll have to grab the QB in the second round, which now means you are passing on running back until at least the third round. If you go for a back in the second round, you’ll have an RB who is good, not great, and no elite quarterback. When others are taking their wide receivers at about the spots they are worth, you will have a need a fill, and odds are you fill it with someone who isn’t worth the spot you have to take him in.

In the ESPN mock draft, Jim McCormick and Shawn Cwalinski went with WRs in the first round. Cwalinski took White at 11 and Drew Brees at 14, leaving Ahmad Bradshaw and LeGarrette Blount as his starting running backs. McCormick somehow still has a job after taking wide receivers with his first two picks — Andre Johnson seventh and Larry Fitzgerald 17th — leaving Peyton Hillis, Shonn Greene and Tony Romo as his next three picks.

Berry and Pierre Becquey took QBs in the first round. Becquey paired Greg Jennings with Rodgers in the second round and made Ryan Matthews his top RB in the third round. He completed the Ryan backfield with Ryan Williams from Arizona and Washington’s Ryan Torain later. Not exactly a dynamic fantasy running game (especially since Williams got injured and is out for the season). Berry took Michael Turner in the second round but then went WR-TE-WR-WR before picking up Mike Tolbert and Willis McGahee. Again, not a great running back selection.

To answer the question “Do I have to draft a running back in the first round?” the answer is no, but you definitely need to make sure you make up for with your next few picks. I don’t start to look for Andre Johnson until 11th overall, after Rodgers and Vick and when I know there will be decent running backs left when my turn to pick comes up again in the second round.

Other draft trends to watch for 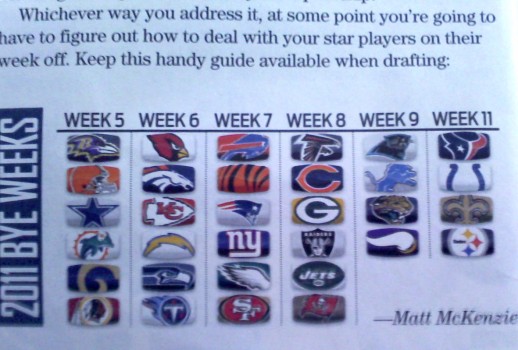 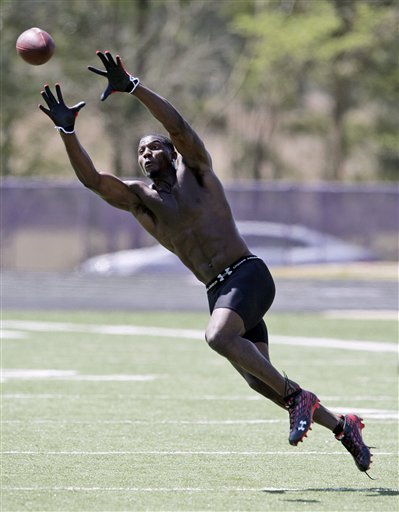 "Hey, I'm Dez Bryant, and I like to catch passes in my undies."

Dez Bryant is rated too high. I had the misfortune of having to start him on one of my teams several times last year. He was inconsistent, frequently injured and reportedly a bit of a head case. This year should undoubtedly go better for him than his rookie season, but make no mistake that Miles Austin is still Romo’s favorite target. Dez should have a good season, I just wouldn’t make him by No. 1 WR.

Oh, and stay away from Hines Ward. Seriously. His average was only 6.3 points per week last season and his median was more than two full points below that. Waiver-wire fill-in, but someone will draft him. Don’t let it be you.