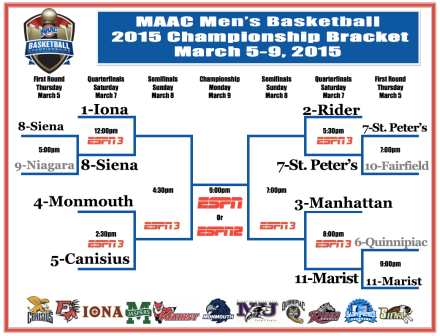 Eleventh-seeded Marist pulled an 80-74 upset on No. 6 Quinnipiac Thursday night in the MAAC Tournament’s play-in round, ending the season for the nation’s top rebounding team.

Chavaughn Lewis led Marist with 26 points and became the school’s career scoring leader during the game. He now has 2,071 career points.

Quinnipiac senior Ousmane Drame went out like a warrior with 27 points and 23 rebounds in 37 minutes of action. Zaid Hearst scored 16 points in his final collegiate game but was just 4 of 18 shooting.

Marist will face Manhattan Saturday in the quarterfinals.

Fairfield limps out of tournament

–
Fairfield managed only seven points in the first half of a conference tournament game and will have all summer to think about it.

Seventh-seeded Saint Peter’s coasted to a 63-33 win over 10th-ranked Fairfield Thursday at the Times Union Center in Albany.

Pour one out for Fairfield tonight pic.twitter.com/nALBQpuaLN

Quadir Welton and Trevis Wyche both came off the bench to lead Saint Peter’s in scoring with 13 and 12 points, respectively, as 10 different Peacocks scored and 14 saw action.

Niagara was eliminated from the tournament earlier Thursday, losing to Siena, 71-54.

Phil Valenti scored 14 points and grabbed nine rebounds to lead Canisius to a 64-50 win over Fairfield on Thursday, giving the Griffs their third straight conference win.

Canisius has a chance to sweep its second consecutive conference weekend on Saturday with a 7 p.m. game at Rider (12-8, 6-3).

Josiah Heath and Kassius Robertson added 11 points each for Canisius while Jamal Reynolds scored 10 and had eight rebounds. Marcus Gilbert led Fairfield with a game-high 18 points but was the only Stag in double-figures.

Zach Lewis, still marred in a season-long shooting slump, was 0-for-6 from the field and didn’t record a point until hitting a free throw with 45 seconds to play, although he did have five assists.

Canisius had 15 assists on 25 field goals.

“We can really pass the ball,” coach Jim Baron said during the postgame television interview. “It’s a very unselfish bunch of guys.

Heath came out of the game after tweaking his left ankle with four minutes to go but the injury did not appear to be serious.

Bonnies come back for OT win

Posley hit a 3-pointer with six seconds left in regulation to force overtime. Jaylen Adams scored the go-ahead basket for the Bonnies in the final minute of overtime and followed it with two free throws that helped put the game away.

Youssou Ndoye had a double-double with 20 points and 15 rebounds for the Bonnies.

Six Dukes scored in double figures, led by 18 from Micah Mason and 17 from Derrick Colter.

What it means: Canisius got down early but came back for a big conference win, drawing even with Manhattan for third place in the MAAC (13-5) with two games remaining. As a reminder, finishing third in the conference is greatly preferred to finishing fourth because of MAAC Tournament pairings – the top three seeds open the tournament against a team that had to win play-in game the night before, while the fourth- and fifth-place teams open against each other.

Baron’s Buffalo finale: Billy Baron was valiant in the final home game of his career, finishing with 22 points, 9 assists, 4 rebounds and 4 turnovers in 37 minutes. Oddly enough, he finished just 2 for 8 shooting – both makes were three-pointers in the first half – and all 16 of his second-half points came from the free-throw line.

Baron gave a salute to the crowd when he checked out but kept his emotions inside (hearing him talk after the game, those emotions are there, believe me). Jim Baron talked about the emotions of sending his second son through Senior Day at length in his press conference.

Canisius has two road games next week before the MAAC Tournament. The only way Baron could have another home game is if the Griffs qualify for the CIT Tournament and Canisius pays to host a game.

Skirmish becomes turning point: A shoving match broke out under the Canisius net with 14:22 left in the game. Jordan Heath was called for an offensive foul and accidentally kicked a Fairfield player in the head when he tried to step over him. Fairfield’s Amadou Sidibe took offense to that. He came over for a word with Heath, which may have been justified, but escalated the incident further by shoving Heath and K.J. Rose went after Billy Baron for reasons we’re still not sure about. (Here’s a picture of the incident happening but it kind of sucks.)

The referees took a ridiculous 19 minutes to settle fouls, eventually giving Heath and Sidibe technical fouls and Rose two technical fouls, which ejected him from the game. After the free throws (Fairfield’s Marcus Gilbert made 2 of 2, Baron hit 5 of 6), Canisius went from down 51-47 to down 53-52 and took control of the game, going up 56-55 shorty after and never losing the lead again.

Supporting cast: Zach Lewis had a nice day with 21 points and 6 rebounds and made 4 of his 6 three-point attempts while five Griffs scored in double figures. Chris Manhertz had 8 rebounds in his second game back from injury, picking up the slack for Jordan Heath, who had two. … Gilbert led Fairfield with 26 points.

Technology is amazing: Jimmy Baron, Billy’s older brother and a professional basketball player in Italy, tweeted that he “walked” with Billy for his Senior Day presentation through the magic of FaceTime.

Odds & ends: Winning after trailing by 12 points is the largest deficit Canisius has overcome this season … Canisius set a new school record for MAAC wins in a season (13) — and did in 18 games, which is how many they used to play before the conference expanded this year.

Next weekend: Canisius wraps up the regular season with games at Rider and Manhattan next Friday and Sunday, which will determine conference seeding. Canisius can finish no lower than fourth.

Canisius coach Jim Baron was more emotional than usual in his press conference Saturday as he discussed Senior Day and sending off a son for the second time. He talked about separating duties of dad and coach (“It’s tough love, it’s unconditional trust”) and called himself a “proud father.”

Billy Baron finished his final home game with 22 points and 9 assists in 37 minutes. In the player press conference, Chris Perez thought it was hilarious that Jim got so emotional. Fairfield coach Sydney Johnson talked about the skirmish that changed the course of the game in his press conference.

“We saw Senator Higgins last night. One thing that he said, one thing that made me a proud father is he said, ‘Billy, I want to congratulate you. You’ve got tremendous humility.’ I’ve never heard… I mean, what a compliment.”

“To get prominent people like a senator to say that, to me, as a father, that’s one of the greatest compliments in the world. I treasure that. When you hear people say that about your kids is very, very special.”

(I should note that Higgins is technically not a senator but a member of the House of Representatives.)

What’s at stake: Canisius dropped to fourth place in the conference standings with Thursday’s loss to Quinnipiac but can get back into a tie for third with a win today. That opportunity comes thanks to Siena, which upset Manhattan Friday night in Albany, 67-63.

Finishing third in the conference is greatly preferred to finishing fourth because of MAAC Tournament pairings – the top three seeds open the tournament against a team that had to win play-in game the night before, while the fourth- and fifth-place teams open against each other.

Home finale: Saturday’s game also marks the final home game of the season, aka the last chance for people in Buffalo to see Billy Baron play (unless Canisius hosts a CollegeInsider.com Tournament game, which I wouldn’t count out). It’s also Senior Day for the Griffs; Chris Manhertz, Jordan Heath, Chris Perez and Baron will be honored before the game (don’t listen to the roster on ESPN, Jordan Heath is a senior).

(I should also note that the media guide prominently mentions the ceremony will take place before the game, which differs from last year, when coach Jim Baron wanted the ceremony to be after the game … which turned into a mess after the Griffs lost to Rider.)

About Fairfield: I thought long and hard before writing this section as I tried to name Fairfield players who contributed to the team both this year and last year. After Maurice Barrow, I couldn’t think of anyone. Then I looked at their roster and realized he’s the only senior on the team and one of three upperclassmen. And lately, he’s been coming off the bench.

Barrow still leads the team in points per game but these are truly some new-look Stags. Marcus Gilbert and K.J. Rose are the new young leaders of the team, coming in at first and second in minutes per game and second and third in points. Thursday’s win against Niagara may have only been Fairfield’s third of 2014, but these Stags are just young enough not to know they shouldn’t be messing with anyone’s seeding for the tournament. I like the Griffs in this one but Fairfield could pull an upset if they’re taken lightly.

What the Griffs need to show: END_OF_DOCUMENT_TOKEN_TO_BE_REPLACED