END_OF_DOCUMENT_TOKEN_TO_BE_REPLACED

Manhattan College announced Monday that coach Steve Masiello will be allowed to return to the team once he earns his college degree.

Masiello signed a contract to become the head coach at South Florida in late March, but the deal fell through when USF uncovered that Masiello never officially graduated from Kentucky, as his bio indicated. The deal would’ve been worth at least $6.06 million over five years.

“Mr. Masiello executed poor judgment but did not intentionally misrepresent himself in applying to the College,” Manhattan president Brennan O’Donnell said in the release. “After participating in graduation ceremonies at the University of Kentucky, he enrolled in summer courses with the intention of completing his degree, but never followed through to make sure that the degree was awarded.”

Masiello will remain on unpaid leave and associate head coach Matt Grady will become the interim head coach. Manhattan won the 2014 MAAC championship and also advanced to the championship game in 2013.

“I made a mistake that could have cost me my job at an institution I love,” Masiello said in the release. “Details matter. Manhattan College has shown me a great deal of compassion and trust during this process, and I will do everything in my power to uphold that trust. I understand that I am very fortunate to have the chance to remain here at Manhattan.”

Here's the MAAC standings heading into the final weekend. Iona-Manhattan on ESPN2 Fri at 7, Canisius-Rider ESPNU at 9 pic.twitter.com/gikpizILAN

With only tonight’s contest against Rider (9 p.m., ESPNU) and Sunday’s showdown with Manhattan (4:30, ESPN3) remaining in the regular season, Canisius appears to be in a logjam near the top of the conference standings.

The MAAC’s tiebreaking procedures can be complicated, but after sifting through each scenario, Canisius’ outlook actually winds up being fairly straightforward.

The Griffs can still pass Quinnipiac and finish second in the conference if they wins both games this weekend and get help from Marist, but what really ends up mattering the most is Sunday’s game at Manhattan.

If the Griffs lose Sunday, they will finish fourth. That means opening against the fifth-seeded team in the MAAC Tournament.

A win Sunday gets Canisius no less than third place, a seed that sets them up with a play-in game opponent in the quarterfinals.

Here’s a flowchart to break it down.

END_OF_DOCUMENT_TOKEN_TO_BE_REPLACED 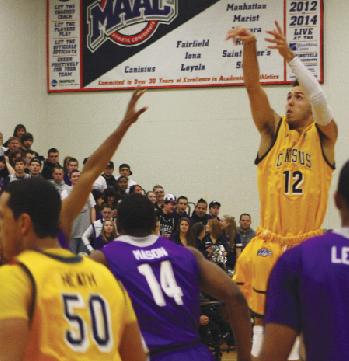 Gaby Belardo continues to push through a back injury, tweeting earlier this week that his back needs “a miracle.”

Canisius didn’t win Friday night on its home court against the Manhattan Jaspers – didn’t come close to winning, really, falling 78-66 – but after being dominated by Niagara and Rider start to finish last week, a game in which Canisius played a good first half was an improvement.

The first 20 minutes might be something Canisius can build off in the future. The defense was adequate – another improvement – and the offense made shots, led by 14 points from Alshwan Hymes and 10 from Gaby Belardo. An early 11-1 run put the Griffs ahead, and they even showed some of that resiliency thing good teams have, fending off pushes from Manhattan to keep the lead for the remainder of the half.

Coach Tom Parrotta opened the game in a four guard look, opting for smaller, quicker players who were able to hit 3-pointers and get penetration.

“If I was playing us,” Manhattan coach Steve Masiello said, “I think that’s a very sound strategy and a good philosophy. We worry about our pressure in our zone, probably [for them] to go small, more skilled guys, and I think that hurt us early in the game.”

Forwards Josiah Heath and Kevin Bleeker played only four minutes combined in the first half (and only nine total) as freshman Franklin Milian earned his first career start while Reggie Groves serves an indefinite suspension Parrotta imposed for academic reasons.

Canisius hit over 40 percent of its shots in the first half and took a 35-33 lead into the locker room. Parrotta came into the game winning exactly 70 percent of games when his team led at halftime, but the Griffs have a tendency to get tired in the second half and fall off.

That’s exactly what happened Friday night, and then some. The Jaspers put on a press that pushed tired Canisius players into bad shots and turnovers while their best player, George Beamon, took command.

Masiello said he got on Beamon, his leading scorer, so hard in the locker room at halftime that he thought other players may not have been able to handle it. But the junior responded, going up, over and around Canisius defenders for 24 points in the second half alone to finish with a season-high 33.

“Beamon, he’s a terror,” Parrotta said. “I thought they wore us down. I thought that was clearly what happened out there.”

Belardo issued the same sentiment, that the Griffs’ lack of depth was cause for tired players who didn’t play to potential down the stretch. Hymes only made one shot after his 14-point first half and all five of Belardo’s turnovers came in the second half. The game was out of reach before Harold Washington finally got his scoring going. He finished with 16 points but had four turnovers in the first half and three more in the second.

“They came at us and we stopped playing hard,” Belardo said. “Me and Harold, for being the main two point guards on this team, he can’t have seven turnovers and I can’t have five. Me and Harold have to do a better job by taking care of the ball better.”

Rarely-used David Santiago was another beneficiary of Groves’ suspension, logging 18 minutes of action. He scored five points in the game’s final 45 seconds to put Canisius over 65 points for the just the second time in 2012. Without his layup with 11 seconds to go, Friday night would have been the fourth men’s-women’s doubleheader out of five this season in which the Canisius women’s team outscored the men’s team.