After I cover a game, I like to read other people’s articles to see how their write-ups compare to mine. I’m not looking to judge whose is better, but to see how everyone else structured their article, the lead they used, what quotes they selected and what stats or plays they thought deserved mention.

Last night I covered the Canisius basketball team’s game against Northwestern State. After I finished my article, I went and found every recap of the game. There were only a handful of us on press row, so it wasn’t too hard to find all of them.

The Griffs won 85-52, and Alshawn Hymes was the star of the night. He tied a MAAC record and set the Canisius mark with nine 3-pointers in the game.

Another storyline was the opponent. Canisius had just played NSU ten days prior on their home floor, losing an ugly game, 86-74.

The idea of a great comeback could also have been played up. Canisius has given up big runs in the first half after taking an early lead several times this season, and they did so again last night. The difference was instead of folding, they answered it with a 17-0 run of their own and took the lead back before going on to dominate the Demons.

Other stats worth noting: Julius Coles went over 1,000 points for his career; Canisius controlled the boards with 23 offensive rebounds; Northwestern turned the ball over 29 times; Canisius had 20 assists.

I posted my recap here. I chose to lead in with the turnaround from the last game. The Griffs dominated in every aspect of the game, from statistical to psychological. I’ve never seen an offense so flustered that they repeatedly threw passes right to Canisius players.

I also want to keep in mind my target audience. I write for the school paper. I mention Canisius players a lot more than opponents, and while I do give criticism where it is due, the school paper generally tries to stay positive.

I didn’t want to lead with the comeback because I thought highlighting the stretch of bad basketball in a game we won by 33 points was too negative. I could have led with Hymes, but I decided to put him as the first part of the body instead.

Bob DiCesare usually covers the team for The Buffalo News, and his article can be found here. He led in with the drought and subsequent comeback, which is what I would have liked to do as well.

His paragraphs are too long for the web and it was 12 missed shots, not 13, but of the bunch, I thought his article was the most well-written (…which is why he writes for the News). I’ll give him a break on the stat because I know he was already passed the first deadline at the press conference and he probably didn’t have time to go through the book and count like I did.

I think there was one other stat that was slightly off, but such is the nature of the beast on deadline writing. Other than that I was impressed with his use of the language and how easily he transitioned from one idea to the next.

My inner dork took over next and I put both articles into Microsoft Word to run some quick stats. Turns out, our articles were actually pretty similar.

If I was on deadline like he was, there’s no way I write 813 words or come up with some of the stats I did. Writing on deadline sucks, but especially as the internet becomes more and more important, getting articles up as fast as possible is a tool of the trade.

One thing I do want to make mention of is his ending. “…Frazier’s second of two open-floor jams worthy of entry in any dunk contest. There was no doubt as to the outcome thereafter.”

That’s it. No more. That’s the thing about news articles, they don’t really end, they just stop. It’s a hard concept to grasp for young writers, because our entire lives we were drilled to have conclusions and tie themes together at the end. It’s dumb, but that’s the way it has to be, especially on deadline. Besides… why waste the time coming up with something clever when numbers show that very few readers actually read to the end of an article anyway?

Okay, enough about this one. The next one I read was written by Paul Casey Gotham, who covers the Griffs for the blog Pickin Splinters. He opened with a focus on Hymes, devoting the first 175 words all to the sophomore’s record-setting performance.

From there he got right into the comeback effort, going into more detail than either of the previous articles. Citing the Griffs’ 1-2-2 press was a nice touch. It really did cause fits for the Demons, and mentioning it puts readers right into the action.

I found it funny that he made special mention of Rob Goldsberry as a 6-foot guard. Six feet tall. That’s a good one. Props to Canisius for making him seem taller in the media guide.

Gotham used a look-ahead ending on his piece, which is common (and effective) in sports writing. If you notice, I used that type of ending as well.

The next two pieces I read were the releases from each of the schools (Canisius’ here, NSU’s here). Keep in mind each outlet’s audience. People who read the write-up on the school page will most likely be fans of that team.

It looks like both schools use similar website providers, which is probably why both have such small pictures and ads in odd places.

School recaps are more bland and factual that news recaps. I don’t mean that in a bad way, just that writers for outside sources can use a slightly more opinionated approach to their pieces.

Both leads were very similar, mentioning Hymes and the number of turnovers committed by the Demons, then how this game effects the season record. Each school talks about its own players and then works in a quote or two. Both end with what is upcoming for the team.

Canisius’ Athletic Communications typically end its articles with some statistical notes, which I love. Stats are great, and being able to pull them makes you sound like you know what you’re talking about. Why yes, Greg Logins is 10th all-time in rebounds.

The last write-up I found of the game was the AP recap. I don’t know who writes these or what the process is, but it looks like an intern at a desk got handed a stat sheet and spit up a 150-word summary.

Again, remember the audience. I’m willing to bet CBS (or any of the other hundreds of outlets that used the AP recap) couldn’t care less about Canisius College. They make one of these for every single game for every single team. One hundred fifty words or so is all they need to tell you the main points of the game, and then they’re done.

If we say that whoever wrote this probably doesn’t care about the game, then the only reason he wrote it is because his boss told him to. So what’s his motivation? Get it out of the way so I can go home faster.

When I write, I try to put fans who weren’t at the game right in my seat on press row, to feel like they are up close and personal with the players, like I get to be. The funny face I got from the out-of-town-score-phone-answerer-guy after a player crashed into the table was funny and would definitely put the reader in my shoes, but isn’t something that goes into an article. That goes here.

Alshawn Hymes is now shooting .427 from 3-point range, which puts him in the top-40 nationally.

What a difference ten days can make.

Just over a week removed from a sloppy 12-point loss to Northwestern State in Natchitoches, La., a completely different Canisius team took the court Wednesday night in Buffalo as the Griffs manhandled the Demons, 85-52, at the Koessler Athletic Center.

It was a career day for sophomore Alshawn Hymes, who set the Canisius College record for most 3-pointers in a single game, with nine.

“I came in this morning and I just felt like something hit me, like the team was ready to play,” Hymes said. “It’s something I felt it a couple games throughout the season so far, but it was just so much stronger tonight.

“I dream about [nights like this] all the time. I know how good of a team we can be, and tonight we proved we’re taking steps in the right direction.”

Hymes finished the night with 28 points, the highest single-game output from a Griff since Frank Turner put up 30 against Southern Miss on Dec. 22, 2009.

Senior Julius Coles also had a night to remember, as his 15 points put him over the 1,000-point mark for his career. He is the 31st player in school history to accomplish the feat.

The teams traded baskets early on the contest, with Canisius leading 12-11 just over five minutes into the game.

The next five-minute block was an uneasy one for Canisius supporters. The Griffs went on another one of their infamous first-half cold streaks, missing 12 consecutive shots while being outscored 10-0 over the drought.

Sophomore Gaby Belardo knocked down a jumper with exactly ten minutes to play in the half, and it was the start of the comeback. Instead of turning the ball over and committing fouls like they did in Louisiana, Canisius controlled the boards and started making shots.

Twelve points from Hymes over the next seven minutes helped back a commanding 26-2 run that put Canisius back in the driver’s seat as they went up 38-23 and never looked back.

The Griffs finished the game with 43 rebounds—21 defensive, 22 offensive. The team also had 16 steals while forcing the Demons into 29 turnovers. 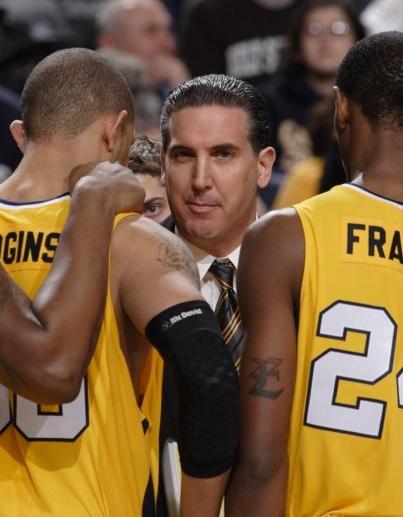 “Had we played like this down in Louisiana… it would have been a different story,” Canisius head coach Tom Parrotta said. “I think some of the guys said that tonight on the bench, ‘How did we let that happen down in Louisiana?’ ”

Even with a big lead, Parrotta stuck with his main rotation of eight players. Freshman Ashton Khan and junior Marial Dhal checked in with 2:06 left in the game and freshman Eric Kindler did the same with 1:03 to play.

Dhal didn’t collect a rebound but blocked two consecutive shots in a three-second span. Junior Rokas Gricius missed his third straight game with back spasms and freshman Chris Manhertz continued to be bothered by a bad ankle.

Up next for Canisius is a road game at Saint Peter’s on Monday, Jan. 3. The Peacocks had won five straight games before losing star players Wesley Jenkins and Ryan Bacon to injury during Dec. 21’s game at Binghamton.

Jeron Belin and Nick Leon now lead the charge for Saint Peter’s. Both are good players, but this would be a great way for Canisius to make up ground in the Metro Atlantic Athletic Conference standings.

“I wish I could come up with something real positive to say about my bunch, but, you know, it’s going to be hard to find a silver lining in that. My daddy says, ‘You can’t make a silk purse out of a sow’s ear.’ Y’all prolly ain’t heard that one.”
-Northwestern State head coach Mike McConathy

Buffalo Bills tackle Demetrius Bell was on hand at the KAC for the game. Bell is a graduate of Northwestern State. He originally went to the school to play basketball.

Two can play that game

Coming into the contest, the Demons’ William Mosley led the nation in blocks per game (4.3). That was only extra motivation for senior Tomas Vazquez-Simmons, the school’s all-time leader in blocked shots, who joked that since both players wear the same number, he was glad to show people who the best number 42 is. Mosley finished the game with four blocks. Vazquez-Simmons had five.