A clever pass across the six-yard box from the left foot of Brek Shea to the right foot of Robbie Rogers in the 73rd minute was the equalizer that gave new U.S. soccer coach Jurgen Klinsmann the fair result his side earned against Mexico in his first game with the team.

The nations are the same, but much was different about the teams from the last time the United States and Mexico met, in the Gold Cup final just a month and a half ago. Players from each side were missing — most noteworthy, Javier “Chicharito” Hernandez from Mexico, Clint Dempsey for the States — as well as Team USA’s coach in the 4-2 defeat, Bob Bradley, who had since been fired. 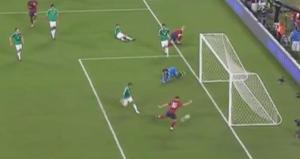 Robbie Rogers taps the ball into the open net.

New coach Klinsmann introduced a few new players into the same 4-2-3-1 formation the U.S. had played in its three previous games at the Gold Cup. But trailing 1-0 at halftime without registering a shot, his second-half changes would prove to be more important.

Juan Agudelo and Brek Shea were brought on in the 60th minute and provided a spark of energy and creativity that was nowhere to be found in the first 45 minutes. Landon Donovan began to possess the ball more and push the issue on offense. Rogers, brought on in the 72nd minute, had hardly broken a sweat before one-touching Shea’s pass into the open goal frame in the 73rd.

Rogers wasn’t even supposed to play in the game. Klinsmann had only added him to the roster three days before when midfielder Maurice Edu had to decline his invitation due to a calf injury. The goal was his second with the men’s national team.

The second-half adjustments were necessary for Klinsmann’s side after Mexico dominated play in the first half. Oribe Peralta’s 17th-minute goal off a corner kick was equally as lucky as it was skilled, sticking his foot around Michael Bradley and redirecting the cross into the far corner of the net past a helpless Tim Howard. Mexico owned play in the half; the Americans hardly possessed the ball in the final third, let alone try to work a combination to set up a scoring opportunity.

The game could have very well ended differently in the late stages, when a series of calls went against the United States. Referee Raymond Bogle (Jamaica) twice opted not to award the U.S. a penalty kick despite pleas from several players. Replays showed that the first incident, before the U.S. goal, looked more like Agudelo tripped over the ball; the second, in the 80th minute, looked like Donovan was tripped by a defender.

Rogers got free again in the 87th minute from a beautiful ball played over his head. He was clear to goal after beating Mexican defender Gerardo Torrado, who grabbed his shirt and pulled him to the ground. Bogle showed yellow instead of red, much to the dismay of the six American players who got in his face to let him know Torrado should have been sent off.

The resulting free kick was blocked by the wall and the game ended without any spectacular chances through three minutes of stoppage time.

Klinsmann’s first comment after the game: it was fun.