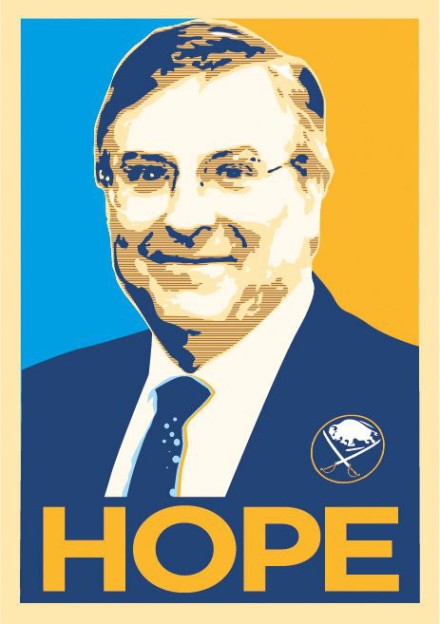 A 40th consecutive Stanley Cup-less season in Buffalo can only mean one thing: the team has several areas it can address in free agency, which opens this Friday, July 1.

The timely scoring and stout defensive zone coverage that propelled the Sabres from 14th to 7th in the Eastern Conference standings fell apart in a first-round playoff collapse to Philadelphia. The defense showed its youth and the offense underperformed.

Darcy Regier, Terry Pegula & Co. are already on their way to fixing those problems. They made an addition to the Buffalo blue line this weekend, receiving veteran Robyn Regehr in trade with Calgary that also brought back Ales Kotalik in exchange for Chris Butler and prospect Paul Byron. While he is known for his defensive abilities, at 6-foot-3, 225 pounds, Regehr also brings a physical presence to the Sabres defense that it has desperately needed the last several seasons.

Darcy says he sees hope for Kotalik’s NHL career, but the rest of us aren’t so sure. The Sabres still have several personnel decisions to make, so let’s take a look at what players the team has under contract. 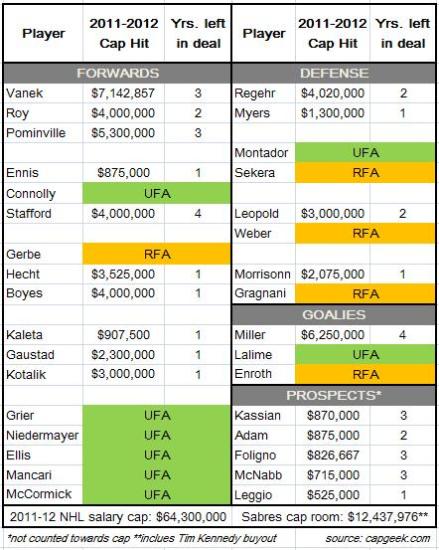 Several things should jump out at you:

The first thing I’ll address is the center. I’m ready to part ways with Tim Connolly. He does provide some value to the team, especially as a penalty killer, but it’s time to move on. Connolly has been a member of the Sabres longer than any other player on the roster, but it’s time to pass the torch down to Jochen Hecht and make way for a more productive player.

Letting Connolly walk leaves a hole on the second line, but I think that spot may be best for Derek Roy. He’s certainly a fan favorite, but I’m not as high on him as most other people are. He takes a lot of bad penalties and he doesn’t produce like a top NHL center. His career-best 32 goals in 2007-08 put him just 20th in the league. Bottom line is I wouldn’t pick a team to win the Cup with Derek Roy as its top center.

However, there is only one player in free agency who could dethrone Roy as the best centerman on the team, and that’s Brad Richards. Richards has reached 91 points twice in his career and is the best forward to be an unrestricted free agent on Friday, but also the most expensive. The last five seasons, his cap hit has been $7.8 million. Buffalo can afford a salary in that range, but they will have to decide if the juice is worth the squeeze.

The rest of the UFA class seems a little pricey for the expected production, especially because it is made up of a lot of older players in their late 30s. Ville Leino (27) is a younger player on the list that has some value, but he seems likely to return to the Flyers.

The restricted free agent side offers more talent but many of those players, like Steven Stamkos and Zach Parise, are rumored to be resigning with their current teams. One player down the RFA list a little ways that I do like is St. Louis young gun T.J. Oshie, who could be a nice fill-in on the second line — that is if he doesn’t resign with the Blues.

The Regehr move helps clean things up on the defensive end, but there’s still some clutter to be sorted out. The easiest thing to say, now that Butler is gone, is just resign them all. Steve Montador isn’t bad and Andrej Sekera has some real potential. Mike Weber is okay for now and he can battle it out with Marc-Andre Gragnani for the last spot in the lineup.

The only real issue is Shaone Morrisonn. The man only managed five points in 62 games this year and seemed perplexed by defensive zone assignments. Morrisonn averaged 16:10 in ice time per game — seventh among Buffalo defensemen. The only thing he had going for him was not being worse than Craig Rivet, but even that ended for him midway during the year. He doesn’t play on the power play and he occasionally kills penalties. You really hope to get a lot more out of a $2 million player.

The Sabres could do nothing and hope he finds his game, or they can waive him down to the AHL and just eat his cap hit (helps having a rich owner). It’d be nice if they could find someone to take him, but other teams have good scouting departments, too.

Resigning everyone is the easiest scenario, but there are good free agents out there if Darcy is still looking to add depth on the back end, which is never a bad idea. I really liked how Kevin Bieksa played for Vancouver in the playoffs, and he’ll be a UFA, but I have a feeling every other GM in the league also saw the playoffs and would like Bieksa on his team, too. His current deal was worth $3.75 million, but after a strong playoff performance that number will go way up. He probably signs back with Vancouver, but if not look for him to go to a team with deep pockets. With one $4 million defenseman already added, I don’t see the Sabres going out and signing an even more expensive player.

James Wisniewski and Ian White are younger, mid-priced defensmen who will be UFAs, if those names interest you.  I was interested in Christian Ehroff before he forgot how to play hockey during the Western Conference playoffs. All are in the $3 million range, but even that may be too high for the Sabres to spend. Shea Weber and Drew Doughty are big name RFAs, and while I’d love to have either of them, their going rates will likely be too high for Buffalo.

I’m interested to see how Gragnani develops. He has work to do still, but he led the Sabres in postseason scoring and that didn’t happen on accident. The kid is an offensive threat and could be our next power play quarterback. I don’t know how much that means for him right away this season, but if I’m in charge Gragnani gets a legitimate shot to make the team straight out of camp.

Easy. Patrick Lalime can go play bar league somewhere while Jhonas Enroth signs a nice little deal. If Enroth plays his cards right he could probably get over $1 million just on the potential he’s shown. If not I bet someone else would give it to him. From the Sabres’ perspective, holding on to him for trade bait is another good reason. Ryan Miller is in the prime of his career and will play 60-some odd games. I’ve seen nothing but good things from Enroth, but Miller may be the best goalie in the league — in the world — on a consistent basis. Maybe they sent Enroth somewhere in a deadline deal over the next few years and pick up a scorer.

This is a real problem. I slid Kotalik in for Cody McCormick on the fourth line so his $3 million inflates the numbers, but it still should make Darcy weary. I liked what Brad Boyes did at the end of the regular season and Hecht is a core member of the team who provides leadership for the younger guys while playing a more limited role.

The problem is that when you add in what Nathan Gerbe will likely get — they better resign Gerbe — you end up with a third line that costs $8.5 million. That’s not how winning hockey teams operate. You need bargain players at the bottom who over-perform their small contracts so you have money at the top for your stars. Why pay guys that much to play 15-17 minutes a game when you could develop a younger guy for a fraction of the cost? (Zack Kassian, maybe? I can dream…)

Paul Gaustad has one year left on his $2.3 million deal, but that’s a way too much to pay a fourth-liner. Kaleta and McCorick could both be making under a million on the fourth line. That’s a typical fourth-line, grind-it-out type of guy. He can win faceoffs? That’ll be good to put on his resume this time next year while he’s packing up his house. One of the top centermen will take the defensive-zone faceoffs, not the fourth line.

Then there’s Kotalik. This one is an enigma, I tell you. $3 million is a lot to pay a guy to score in shootouts. I don’t know what the plan is here.