The team piled on Mills after the shot went in.

Two thousand school children roared for Tiahana Mills as she ran down the court as fast as the legs on her 5-foot-5 frame would take her. The freshman dribbled four times as the clock ticked from three seconds down two and then one.

Mills took one last stride and launched a half-court shot fractions of a second before the buzzer sounded and was pummeled by her teammates after the ball banked off the glass and went in, giving the Canisius women’s basketball team a 65-62 win over Siena Friday in another wacky and wildly exciting Kid’s Day at the Koessler Athletic Center.

Kid’s Day games are always something special, and Mills’ buzzer-beater ranks Friday afternoon’s game as the best finish I’ve seen in my four years at Canisius.

Mills said her high school teammates used to put up half-court shots after practice and she once made one before halftime of an AAU game, but this was her first true buzzer-beater.

“Its amazing. When the team fell on me at half court, I never had that before,” Mills said.

Here’s a look back at the Top 5 best finishes I’ve seen in four years at Canisius:

END_OF_DOCUMENT_TOKEN_TO_BE_REPLACED

Canisius captain Scott Moser had never beaten the RIT Tigers in his first three seasons at Canisius. No wins, eight losses and no ties, outscored 39-10 and shut out three of the last four games. 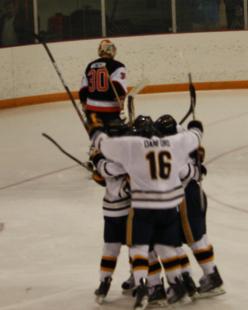 And that was when Cory Conacher and Vinny Scarsella were in the lineup. What would it be like without the program’s top two career scorers? Who would step up? The senior captain had never scored in eight career games against RIT.

Moser and Taylor Law broke down the ice on a 2-on-1 with just over five minutes remaining in the game, the score tied at one. Law fed a pass over to Moser, whose one-timer beat RIT goalie Josh Watson for the game-winning goal. Kyle Gibbons added an empty-netter with 45 seconds left to seal Canisius’ first win over RIT since Feb. 10, 2008.

“When we got that empty-net goal, it really set in,” said senior goalie Dan Morrison, who made 33 saves and picked up his first career win against RIT. “I went over and hit the ‘Easy’ button that the lax team brought and that’s when it really set in. We played so well and it finally paid off.”

RIT senior goalie Shane Madolora, who led the nation with a .935 save percentage last season, did not play for the Tigers. Coach Wayne Wilson said he wanted to give Madolara rest with a game against Union this Saturday, which is ranked No. 12 in the country.

RIT opened the scoring early in the first period with a power-play goal from Nolan Descoteaux with freshman Logan Roe in the penalty box for hooking. The RIT defenseman moved in with the man advantage and hit a one-timer from Chris Haltigin that found its way past Morrison.

Canisius answered with a power-play goal of its own just over a minute into the second period as Preston Shupe beat Watson with a one-timer to his stick side. Kyle Gibbons made a nice play in the corner to feed Shupe, with Ryan Bohrer also assisting on the goal.

The game was deadlocked at one until Moser’s goal broke the tie.

“It felt great; I was kind of shocked when it went in,” Moser said. “You know I’m not a real big goal scorer, but it was a great play by Taylor Law and I’m glad I was able to finish.”

RIT had its would-be go-ahead goal waved off with 7:48 left because of a high stick.

One of the biggest things Canisius did better than last weekend’s games against Quinnipiac was shoot the puck. RIT outshot Canisius 34-24, but the 24 shots were one more than the Griffs had in both games combined last weekend. Canisius took a pounding in Hamden, Conn., losing games to QU on Oct. 15 and 16 by a combined score of 11-1.

The Bobcats opened the scoring less than two minutes into the first game and would go on to beat Morrison six more times on the night, four of which coming on the power play. Down 4-0 in the second period, Gibbons scored the only goal of the weekend for the Griffs with assists from Bohrer and Mitch McCrank.

The Griffs had 18 penalty minutes in the game and were outshot miserably, 37-9.

The team gave a slightly stronger performance in Sunday’s contest but was shutout 4-0 and outshot 40-14. Sophomore Tony Capobianco played all 60 minutes in net and made 20 saves in the second period alone. The Canisius power play, which was stopped on its only opportunity Saturday, went 0 for 4 Sunday.

Quinnipiac freshman Matthew Peca, a seventh round draft pick of the Tampa Bay Lightning, had two points on the weekend but has no relation to former Sabre Mike Peca.

Mustard out for season

Defenseman Jordan Mustard is recovering from an injury will not play this season. Head coach Dave Smith said the sophomore is still dealing with effects of the concussion he had last year.

Mustard, a 20-year-old from Markham, Ontario, looked good in his first 12 games last season before missing the last 26 due to injury. He is listed as a Student Coach on the team’s website.