After announcing his intention to transfer on Monday, UB point guard Shannon Evans said the school was “basically going to block all the schools I want to talk to.” But Evans and athletic director Danny White met Monday night, and in light of public backlash, White announced Tuesday that he decided to remove restrictions on Evans’ transfer.

“After learning about the request for a release [Monday], and meeting with the student-athlete, I have decided that granting Shannon Evans a full release to transfer to any school in the country is in his best interest,” White said in a statement. “We wish Shannon nothing but the best in his future academic and athletic pursuits.”

Evans seemed most upset Monday about restrictions to Arizona State, where Bobby Hurley is now coaching, and VCU and Old Dominion, which are near where Evans is from in Virginia.

Evans is very close with Hurley, which makes me think Arizona State is the leading contender, but Evans will have plenty of options. He’ll have to sit out next season but has two years of eligibility remaining.

One source close to the situation told ESPN that Buffalo transfer Shannon Evans is leaning towards following Bobby Hurley to Arizona State.

Shannon Evans has been granted full release to transfer and has already been contacted by Arizona State, Boston College, Miami and St. Johns

UB guard Shannon Evans is leaving the school, according to a report from Big 4 Talk’s Johnathan Snyder.

Further, Snyder reports that UB is blocking Evans from transferring to a number of schools, including Arizona State, where former UB coach Bobby Hurley just took over.

Evans scored 15.4 points per game as a sophomore and dished out 4.6 assists per game. He was one of the most important players on the team’s MAC championship run.

Losing a stud like Evans reflects poorly on UB athletic director Danny White, who recently promoted assistant coach Nate Oats to head coach without conducting any other interviews. A main benefit of giving Oats the job was the perception that it would help keep the talented players on the team.

Evans also tweeted (and later deleted) that he couldn’t even get an audience with White to discuss his future:

I felt like i did a few good things here in buffalo, it amazes me that I can't even sit down with the AD & discuss my future!

Danny White wouldn't give one of his most important players the time of day? https://t.co/PATXX5mp0F

Also, Evans was & is still happy with Nate Oats hire. Problem for him is with relationship with AD

For what it’s worth, teams usually block players from transferring to conference opponents or local rivals. Anything beyond that is seen as excessive.

If you’re tallying White’s recent blunders, mismanaging the Hurley situation was one, not conducting a national search for a new coach is two, and not accommodating one of the most important athletes on his campus would be three.

Evans’ comments to Mark Gaughan of the Buffalo News are particularly damning:

Evans said Oats informed him that UB would allow him to transfer but would block a move by Evans to go to Arizona State, Virginia Commonwealth, Old Dominion or another MAC school. Evans is a native of Suffolk, Va.

“They’re basically going to block all the schools I want to talk to,” Evans said. “I just feel like they don’t want my best interests and what’s best for me personally, and I really don’t like that. I feel like if I want my release, OK, any MAC school, I understand. But they shouldn’t block me from any school in a higher conference than Buffalo.”

Evans said he wanted to stay in Buffalo for the community, but the administration made him feel he was not important and not a priority.

From UB student-athlete handbook: Typically the UB Athletic Department denies releases to other MAC schools as well local Division I (1/2)

instituions Canisius, Niagara and St. Bonaventure. However, each case will be reviewed on an individual basis. (2/2)

Postgame interviews from UB’s win over Bowling Green that gave UB the 2-seed in next week’s MAC Tournament:

–
From left to right, that’s Will Regan, coach Bobby Hurley, and Shannon Evans.

Regan had 17 points and eight rebounds on his Senior Night.

UB has a bye all the win into the semifinals of the MAC Tournament. Here’s the bracket (click for larger view): 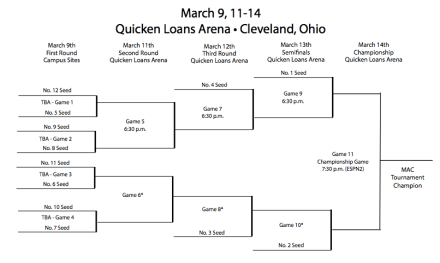 What it means: UB earned the No. 2 seed in the MAC Tournament with its win and the results of Friday’s other MAC games. Players and coaches cut down the nets after the game as the PA announced the Bulls as MAC co-champions, along with Central Michigan and Kent State at 12-6.

The MAC highly rewards its top seeds, giving seeds 3 and 4 byes into the quarterfinals of the conference tournament and seeds 1 and 2 byes into the semifinals. UB’s first tournament game will be Friday, March 13 against a team to be determined. Two years at UB, two MAC East titles for Bobby Hurley.

Bobby Hurley cuts down the net at Alumni Arena as UB is announced as MAC co-champions #UBBulls pic.twitter.com/fhA83haOHF

Play-by-play: The final minute and a half was wild. Here’s how it went down:

Justin Moss puts UB ahead 71-70 with 1:32 left. Bowling Green’s Spencer Parker tied it by making one of two free throws with 1:12 to go, then a BG steal led to a David Joseph layup that regained the lead. Will Regan knocked down his fifth three-pointer to put UB back in front, then Jospeh’s layup made it 75-74 Bowling Green with 26.3 remaining.

Lamonte Bearden answered with a jumper to put UB up 76-75 with 14.9 seconds left. Anthony Henderson missed the front end of a one-and-one with 7.4 left and UB got the rebound. Justin Moss hit one of two free throws to put UB up 77-75. Moss then recovered a loose ball as BG came up the court.

Moss appeared to call for a timeout, which would’ve been disastrous because UB didn’t have any timeouts left. Refs instead called a jump ball as Moss failed to secure the ball. Possession went to BG with 1.3 seconds left. The Falcons had the ball by their bench and threw up an alley-oop for the tie, but the pass went out of bounds. UB celebrated as the horn sounded, but no one had touched the ball so the clock shouldn’t have started. UB inbounded the ball deep into BG territory and ran out the clock on a 77-75 win.

UB looked to be in some trouble late in the first half down 34-20 with 4:16 left before halftime, but an incredible hot streak brought the game to a 35-35 tie at the break. Will Regan started the run with a three-pointer, then Shannon Evans hit one, Regan hit another, and then Evans hit two deep triples that earned a standing ovation as UB went into the locker room.

UB’s season-best winning streak is now at six games. Moss finished with 19 points while playing only 21 minutes in foul trouble. Regan had 17 and Shannon Evans had 14. Jehvon Clarke led Bowling Green with 21.

MAC Tournament bracket: UB has a bye all the way into the semifinals. The 2-seed is on the bottom in Game 10.

UB announces a new record attendance of 6,607 at Alumni Arena tonight. Standing room only for sure.

No T: Hurley was very upset with the refs when a BG’s Delvin Dickerson intentionally bumped Shannon Evans while checking out with 10:48 left in the game. The officials went to replay but decided not to call a technical foul.

MAC Player of the Year?

Shannon Evans doesn't want there to be any doubt: "Justin Moss is the Player of the Year."

Senior Day: UB seniors Will Regan and Xavier Ford were honored prior to tipoff.

Next: UB’s next game will be in Cleveland Friday during the MAC Tournament, opponent TBD.

–
The players were pretty loose after the win. Skeete was more worried about getting Rodell Wigginton’s alley-oop on SportsCenter. Bearden and Evans had eight assists. Skeete had 14 points.

–
Hurley enjoyed having all three guards contribute in various ways and liked how his team defended Drexel’s Damion Lee. He also said Xavier Ford is fully cleared following his concussion.

Drexel coach Bruiser Flint did not meet with the media.