MAAC All-Rookie selection Dominique Reid scored a career-high 24 points but ninth-seeded Niagara couldn’t overcome 9.1 percent three-point shooting in a 71-54 loss to eighth-ranked Siena Thursday in the play-in round of the MAAC Tournament.

Senior guard Evan Hymes led Siena’s balanced attack with 14 points while Ryan Oliver had 13 off the bench. Siena, the host team, advanced to face top-ranked Iona at noon Saturday. The winner of that game gets the Canisius-Monmouth winner.

Niagara finished the year 8-22 overall — a record that was buoyed by a four-game winning streak that closed out the regular season. Niagara endured losing streaks of nine, seven and four games this year and lost 17 of its first 20 games with an extremely young team.

Niagara returns every player next season and will still only have one senior, Rayvon Harris, barring any transfers.

Leading scorer Emile Blackman scored 13 points Thursday for Niagara on 5-of-11 shooting while Wesley Myers added nine points and was the only Purple Eagle to hit a three-pointer as the team went 1-for-11 from deep. No one else scored more than four points (full box score).

Niagara opens the men’s portion of the MAAC Tournament today with a 5 p.m. play-in game against Siena, which is hosting the tournament at the Times Union Center. How convenient.

So does Niagara have a chance or what? For most of the season, the answer to that question was a sad shrug followed by a “probably not.” Then Niagara got hot in mid-February and won four straight, giving it the longest active winning streak of any team in the conference.

Pair that with the fact that Siena has lost five in a row heading into Thursday’s game, and you have to think Niagara has a shot. What Siena has going for it is that it’s the host team, playing in its home arena in front of its home fans. But if Niagara plays strong defensively, limits offensive rebounds and has quality secondary scoring to supplement Emile Blackman, it could send Siena home early in front of its fans, which would be pretty sweet for the Purple Eagles.

Players to watch: Siena’s Rob Poole was named Third Team All-MAAC for the second straight year while Niagara’s Dominique Reid was named to the All-Rookie Team. Blackman leads Niagara at 13.6 ppg while Poole’s 14.2 lead Siena. One player to keep and eye on is Siena forward Javion Ogunyemi, who had a big game against Niagara in Lewiston.

My mother just geeked me

Bold prediction: Poole, who sat out Siena’s final regular season game with an ankle injury, hits at least four three-pointers to lead the Saints to victory.

The hoop Siena players were warming up on at the Koessler Athletic Center crashed to the floor and shattered prior to Friday night’s game against Canisius.

UPDATE: Here’s a low-quality video of the hoop coming down.

(Sorry the video is vertical, had to take it sneakily.)–

No one was injured as a result of the crash, which happened at about 6:15 p.m. The hoop appeared come loose after a dunk by Willem Brandwijk before it buckled and fell while players were shooting on it. The backboard shattered when it hit the floor, not from the dunk.

UPDATE 2: The game will game at approximately 8 p.m., we’re told.

Hoop Siena was warming up at just crashed and shattered. No one hurt. #MAACHoops pic.twitter.com/PvI56dJGle

I don't think anyone dunked on it or anything. It just came down.

No word yet if Canisius-Siena is delayed but I'd imagine Siena would like to warm up. Clock still counting down at 39:30 #maachoops

Just went up to the video room at the KAC. Hoop wasn't in the shot during warmup. All you see is guys looking at each other like 'now what?'

UPDATE: Officials are estimating an 8 p.m. tip for Canisius vs. Siena #maachoops

New glass is all set. Getting ready to raise it back up pic.twitter.com/nyXVLIUp38

I'm told the no-dunking-during-warmups rule begins when the refs come out 20 minutes before the game. Won't affect Siena here. #maachoops

Refs today are Kevin Ferguson, Donnie Eppley and Rusty Cooper RT @Hoops_AllDay4 who are the officials? 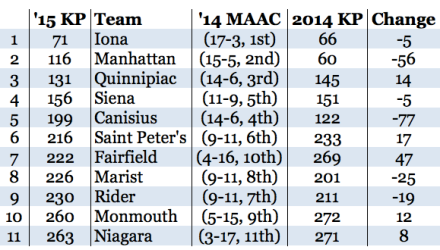 END_OF_DOCUMENT_TOKEN_TO_BE_REPLACED

SPRINGFIELD, Mass. – Billy Baron did not have exceptional game Saturday under the tournament lights he’s waited for all year. He was only very good, which is to say Siena executed its gameplan against the best player in the conference, badgering him relentlessly in the hope of forcing him to play differently than he would like, because playing in that way would surely mean their defeat.

Baron couldn’t seem to get comfortable on the floor of the MassMutual Center, but in the end, the MAAC’s Player of the Year still did enough, still found ways to lead the Griffs to victory. He led Canisius with 17 points, six assists and five steals en route to a 71-65 win over fifth-seeded Siena in the MAAC quarterfinals, lifting Canisius to the semifinal round for the first time since 2002.

That feat in and of itself would have been reason for celebration in previous years. But not this time. This year is all or nothing, just like Baron has said and tweeted all year, and the road gets exponentially harder from here.

Canisius faces reigning champion and No. 1 overall seed Iona in the semifinals Sunday, the same team that eliminated the Griffs last year.

Iona, led by MAAC Coach of the Year Tim Cluess and first-teamers Sean Armand and A.J. English, made quick work of Rider in its quarterfinal game, winning 94-71 while shooting nearly 60 percent.

English needed to score only six points in the win as Armand scored 20, big man David Laury had 18 and Tre Bowman, often forgotten about in this deep lineup, went off for 28.

Iona scores the fourth-most points in the country and plays so fast most teams can’t keep up. They’ve been beaten by conference opponents three times this year: Once when Quinnipiac outrebounded them 50-27, once when Manhattan squeaked past in overtime and once when Baron was the best player on the court.

The star will need to be the star again Sunday, and he’ll need everyone around him to play their best too. Chris Manhertz got that memo Saturday and was dominant in the second half, finishing with 10 points and 11 rebounds for his 13th career double-double.

“Just being relentless,” Manhertz said of the difference in the Griffs’ rebounding Saturday compared with the rest of the season. “Coach Baron preached that to us throughout the whole season. I know we had ups and downs with it the whole season, but it finally sets in when it’s either you win or go home, and I think the guys responded pretty well today.”

As for secondary scoring, Zach Lewis hit a three-pointer early but made freshmen mistakes as the game progressed. It was another veteran, Chris Perez, who stepped up, leading the team in field goals with six and finishing as the second-leading scorer behind Baron with 13 points.

“I told the guys, this is my senior year, they better not mess it up for me,” Perez said in the press conference. The room broke into laughter, but of course, Perez wasn’t entirely kidding.

This is it. It’s one win down for Canisius, two more to go.