The men’s and women’s MAAC basketball tournaments will feature a slightly different format in 2016, giving the top two seeds an added day of rest between the quarterfinal and semifinal rounds.

The quarterfinals will now open Friday for teams seeded first and second, which gives them Saturday off before the semifinals on Sunday, assuming they win. Teams seeded third and fourth have Friday off but will have to win Saturday and Sunday to advance to Monday’s final.

The previous format had play-in games on Thursday, with the quarterfinal round opening for everyone Saturday. Here’s a look at the games that will be affected, using last year’s bracket. (The times of the games will change; full schedule below.)

END_OF_DOCUMENT_TOKEN_TO_BE_REPLACED 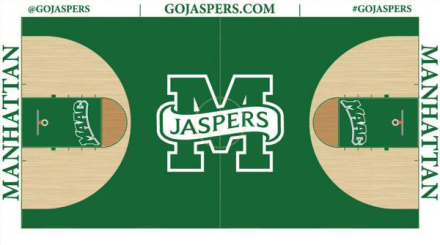 The school released images of Draddy Gymnasium’s new court design Monday. The only part of the floor that features a traditional hardwood color is inside the three-point arc.

“We want to own the color green,” Manhattan athletic director Noah D. LeFevre said in the release. “How facilities appear matter and I am happy with the way this important component turned out.”

All parts of the court that are out-of-bounds will be painted white, with the Jaspers’ website, Twitter handle, hashtag and school name written in green.

“[The court] will be another area in which we separate ourselves in college basketball,” coach Steve Masiello said. “It will now make Draddy Gymnasium one of the hardest places to play because of the Green Monster.”

Manhattan is 34-13 at home the last four years under Masiello.

The design, sanding and repainting work will be done by Prater Industries.

–
Canisius got several open looks from the free-throw line in Sunday’s 63-60 loss to Manhattan. Jermaine Crumpton and others hit some of those shots, and sometimes they missed.

Manhattan did not seem overly concerned with adjusting its defense to take that shot away. That’s because Steve Masiello is a smart coach. He has run the percentages and he does not care.

If you want to pull up from the free-throw line against Manhattan, go for it. He calls it fool’s gold.

“We’ve charted over 600 games,” Masiello said. “The 15-foot shot, challenged late, is a 26-percent shot. It appears at times, when teams make two or three in a row, you actually think they’re hurting your zone. But it actually plays into your hands. That’s one of the reasons they shot 39 percent for the game.

“This goes back to when I was at Louisville,” Masiello continued. “We take it away, we take the high post away with the opposite guard, once it goes in we fan out and go man and match up. Most of the time you’ll see a four-five (a forward) in that spot.

“Give Canisius credit, they made some shots in that spot like you said early there, but that shot will not beat you. I’ve seen it beat a team once — unfortunately it was to go to the Final Foul, it was Michigan State against us in the Elite Eight — but that shot will not beat you. The percentages are just astronomical. It’s what we call fool’s gold. I’m not going to tell you how to beat the zone, but we’re OK with that.”

So, yeah. Steve Masiello is smarter than you. Go ahead and take that shot. He dares you.

If there were any questions about Canisius’ outlook for the 2014-15 basketball season, Jim Baron cleared those up Thursday night during the MAAC’s preseason Coaches Show.

“It’s going to be a rebuilding type of year for us,” the third-year coach said.

(turn the volume on)

The Griffs lost five of their top six scorers from last season and four of their top five rebounders. They also graduated four starters, including the MAAC Player of the Year, Billy Baron.

The show was a two-hour roundtable discussion with all 11 MAAC head coaches, commissioner Rich Ensor, and ESPN commentators Doug Sherman and Rob Kennedy. (A full replay can be found here.)

Here are some highlights:

BREAKING: All #MAAChoops coaches are "excited" in one way or another, I think almost all used that word once #MAAC15

Iona's Tim Cluess never misses an opportunity to pitch the MAAC as a two-bid league. Also said today the MAAC should have 2 teams in the NIT

Manhattan's Steve Masiello chimes in: "I challenge those nonconference teams [who doubt the MAAC] to play us, because they won't"

Masiello isn't wrong there. More than a few power five teams will not step to Iona and Manhattan

Chris Casey from @NUPurpleEagles talks about new team with a lot of new players #MAACHoops15 pic.twitter.com/J1TCGi8LKH

Tim Cluess: "Our team is great. The competition is always tough and we're pushing for a second NCAA bid. We'll be a deeper team." #ICMBB

Jim Baron: "I agree with a stipend for student-athletes"

Patsos asks King Rice how it felt when fans bought his UNC jersey and he got nothing out of it. "They didn't buy mine too often." Awesome

Jim Baron jokes he'll look down the bench this season and forget and say "Billy, go in." Which is funny because Billy was almost never out.

Billy Baron was second in the NCAA in minutes per game last year. Played even more than Frank Turner his senior year http://t.co/dAunA3h9us

(After this, Jimmy Patsos and King Rice poked fun at Baron’s social media game. So Baron looks at Rice and says something like, “Yeah, I’ll take you to Brooklyn…” where he grew up to see how tough Rice is there. Everyone laughed.)

MAAC Coaches Show just wrapped up. Didn't need to last > 2 hours but a nice event. Coaches seemed to enjoy it.

Manhattan College announced Monday that coach Steve Masiello will be allowed to return to the team once he earns his college degree.

Masiello signed a contract to become the head coach at South Florida in late March, but the deal fell through when USF uncovered that Masiello never officially graduated from Kentucky, as his bio indicated. The deal would’ve been worth at least $6.06 million over five years.

“Mr. Masiello executed poor judgment but did not intentionally misrepresent himself in applying to the College,” Manhattan president Brennan O’Donnell said in the release. “After participating in graduation ceremonies at the University of Kentucky, he enrolled in summer courses with the intention of completing his degree, but never followed through to make sure that the degree was awarded.”

Masiello will remain on unpaid leave and associate head coach Matt Grady will become the interim head coach. Manhattan won the 2014 MAAC championship and also advanced to the championship game in 2013.

“I made a mistake that could have cost me my job at an institution I love,” Masiello said in the release. “Details matter. Manhattan College has shown me a great deal of compassion and trust during this process, and I will do everything in my power to uphold that trust. I understand that I am very fortunate to have the chance to remain here at Manhattan.”