Fans also have the opportunity this year to vote on which throwback jersey they’d like to see their team wear.

Here’s a look at all three options for each school, along with my picks. Feel free to disagree. 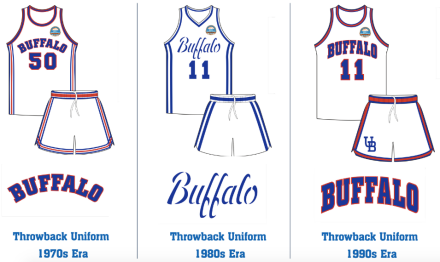 I like the simple blue and white color scheme of the 1980s jerseys, but the gaps in the script font bother me.

Both of the other two options include red stripes. I’m not wild about incorporating red into a UB jersey, though it does give the uniform a nice Buffalo feel, even if it says “Bills” more than “UB.” 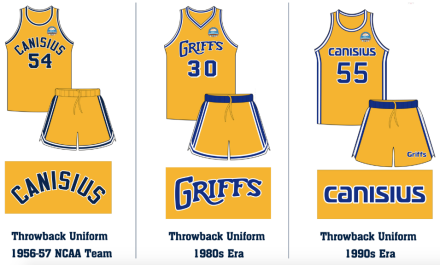 This one, to me, is a no-doubter: Bring back the 1980s Lakers-themed jersey.

The 1990s jersey is sharper. I love the lettering. It’s very ’90s. The S’s remind me of Star Wars for some reason and the striping is better than the 80’s jersey.

But the 1980s jersey is just awesome. Seeing Ray Hall’s No. 30 with the Lakers font brings back a time when Canisius basketball was big. I know the 55 is Michael Meeks’ jersey, but somehow Hall’s 30 means more. Maybe that one also gets a boost since Mike Smrek, who played for Canisius in the ’80s, also went on to win two NBA titles with the actual Lakers.

The ’50s jerseys aren’t bad, but they’re a little too plain for me. They would, however, make awesome tanks if the school wanted to give them out to students at a game. 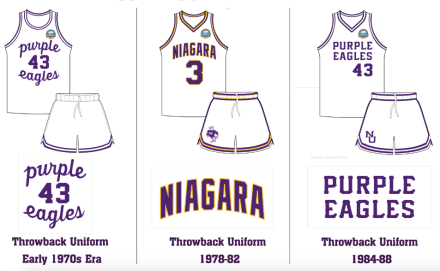 Big fan of the NU eagle logo on the 1978-82 shorts, but the top doesn’t do it for me. The number looks too big and the yellow border feels weird.

Conversely, I really like the top on the ’84-’88 jersey, but don’t care for the NU logo on the shorts. “Purple Eagles” is a lot of letters to stack on top of each other, but it works here.

But for Niagara I’m picking the 1970s throwback. I have no complaints about it; it’s simple and very clean. The striping isn’t over the top. The lowercase scripts feels super 1970s and apparently I like that. It’s sharp. 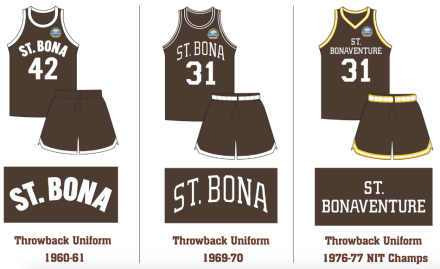 So, these jerseys look kind of similar.

The 1960-61 jersey has a standard, boring font, but it’s a clean and serviceable jersey. I like the font better on the 1969-70 jersey, but the double stripes on the top don’t match the stripes on the on the shorts.

The yellow trim on the ’76-’77 jersey works better than the yellow on the Niagara jersey, and it’s similar to the color the Bonnies still accent with today. “St. Bonaventure” has to be shrunk down so it can fit across the jersey, but I don’t hate it. I guess I’d give this jersey the edge over the ’60-’61 jersey, but I could be talked into either. 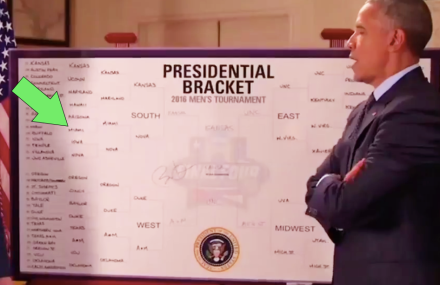 President Obama got burned by UB last year when he picked them to upset West Virginia in his annual March Madness bracket with ESPN.

Obama’s not letting that happen again. In his 2016 bracket, revealed Wednesday, the president picked Miami to beat UB and Arizona before falling to Villanova in the Sweet 16. His national champion is Kansas.

UB, seeded 14th, is being picked to beat Miami in only 7.7 percent of ESPN.com brackets. Vegas Insider lists the Bulls as 14-point underdogs.

Here’s Obama’s full bracket. It’s worth noting that his picks last year only finished in the 40th percentile of all ESPN.com brackets.

Obama has filled out a presidential bracket every year since 2009, correctly picking the national champion once in his first year (North Carolina).

“All credit goes to Dion [Wright],” Posley said. “I don’t take any credit. Just because I hit that last shot doesn’t mean anything. Dion kept us in the game.”

Wright had a night to remember, scoring a career-high 26 points to lead the Bonnies to their second consecutive win over UB, 60-58. The senior forward scored in a number ways, beating defenders for layups, floaters, hooks and runners while going 12-for-19 from the field.

“This dude’s crazy,” Posley said, estimating Wright has 10 different ways of finishing from close range. “He could throw the ball at the rim without looking and it would go in.”

“He’s got like the YMCA game a little bit,” UB coach Nate Oats said. “You don’t think he’s going to blow by you and then he’s to the rim finishing a second later.”

Wright kept it simple: “My teammates found me in positions where I was able to score. I just tried to make the most of opportunities when I caught the ball.”

“It wasn’t a pretty game,” coach Mark Schmidt said, “it was just two teams going at it. It wasn’t great execution at either end. We won the game not because of our offense, but I thought we defended so much better in the second half. … We didn’t play our best but we won on the road.”

“We shot 1-13 from 3, missed 13 free throws, it was bad,” UB coach Nate Oats said. “Twenty-one turnovers. I still can’t figure out how we were even in the game to be honest with you.”

Oats also took a little dig into his team’s decision-making.

“We got some young guys in the program who thought they’d figured out what a good shot was,” he said. “Apparently tonight we’re back to ground zero again and where they can’t remember what a good shot is and what a contested one is and [when] to make the one more pass and get your teammate a wide-open look. It was just bad on offense tonight.”

What it means: With the win, St. Bonaventure cemented itself as the Big 4’s top team for another season. The Bonnies beat Canisius and UB in a span of eight days and can sweep the season set from local opponents for the second consecutive year with a win over Niagara later this month.

How it happened: Marcus Posley hit a jumper from the top of the key with 10 seconds left and Derrick Woods blocked Lamonte Bearden’s layup at the buzzer to give St. Bonaventure an exciting win.

The Bonnies led by five with 2:30 left but inexcusably lost track of the shot clock on consecutive possessions and almost paid for it dearly. The first time it resulted in a desperate 3-point heave; the second led to a shot clock violation, after which Rodell Wigginton hit two free throws to tie the game.

Both teams started slow and never really got into rhythm, which was a stark contrast from UB’s 98-96 OT win against Canisius last weekend. The only player who really brought it from start to finish was St. Bonaventure’s Dion Wright, who dropped a career-high 26 points on 12-of-19 shooting. Posley added 13 points for St. Bonaventure while Idris Taqqee had seven rebounds.

Rodell Wigginton led UB with 16 points while Bearden had 12. Jarryn Skeete was shut out.

Game ball: Dion Wright. Wright got the Bonnies ahead early while almost everyone else in the game struggled, scoring 10 of Bona’s first 14 points. He sat early in the second half with three fouls but was a force UB didn’t have many answers for. Final line: 12-19 shooting, 2-2 free throws, 3 rebounds, 2 assists, 1 turnover, 3 steals.

Under the radar: UB’s CJ Massinburg. The freshman guard from Dallas impressed against Canisius last weekend and flashed a variety of moves Wednesday as well. He’s prone to the occasional head-scratching freshman play (lost the ball off his foot, bad turnover under his hoop), but you live with that when the kid only has seven games under his belt. Once he settles in to the pace of Division I he’ll be a nice player for Nate Oats and the Bulls.

Deep woes: Both teams struggled mightily from 3-point range, combining to shoot 3 for 34 (8.8%). UB made only one 3 in the game – Blake Hamilton’s with 13:37 to play. Skeete, normally the team’s top deep threat, attempted only one triple in the game.

Series history: This was just the 11th all-time meeting between these teams (UB wasn’t D-I until 1991). Bonaventure leads 8-3.

Next: UB goes to Duke on Saturday, where former AD Danny White would’ve played the school at which his father is AD. Bona hosts Ohio on Saturday.

What it means: This was a great college basketball game that both teams should be able to build on. Canisius and UB both looked like they were done for at different points in the final two minutes of regulation, but showed plenty of heart to rally. UB’s depth and size was on display while Canisius flashed its guard play. In the end it was a lapse in the backbone of Canisius’ defense that allowed UB the winning basket.

The Bulls have won three straight ahead of their Wednesday meeting with St. Bonaventure after dropping their first two Division I games of the year. Canisius is expected to be stronger this year than last season but was swept by UB and St. Bonaventure for the second year in a row. Only two conference games against Niagara remain on Canisius’ Big 4 slate. 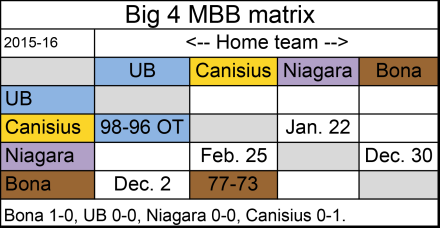 How it happened: UB had the ball in a tie game as the final seconds ran off in overtime. Lamonte Bearden nearly lost control of the ball, but that scramble led to Canisius losing forward Nick Perkins under the hoop. A wide-open Perkins slammed the ball home and Canisius didn’t have enough time for a final shot.

Just when it looked like UB was about to put the game away in the second half, Canisius’ Jamal Reynolds missed an and-1 free throw down by two points with 1:43 to go – but refs blew the play dead, apparently thinking Reynolds was shooting two shots, and Canisius got the ball back via the possession arrow. The Griffs tied it on that possession and went ahead on the next. Then Jarryn Skeete hit a fade-away three-pointer with 6 seconds left to send the game to overtime.

Kassius Robertson had a career-high 24 points to lead Canisius while Bearden had 18 for UB as six Bulls were in double figures.

UB opened the game on a  7-0 run and teams traded the lead most of the first half. Canisius was up 27-24 when McMillan picked up his 3rd foul … UB ended half on 18-6 run while he sat to take a nine-point lead into the locker room.

Series history: This was the highest-scoring game in Canisius-UB history, which dates back to 1912. Canisius won the only other overtime game between the teams, 77-63, in 1991. The all-time Canisius-UB series is now Canisius 31-17. Nate Oats won his first game against Canisius; Jim Baron is now 7-4 against UB and 2-2 against them with the Griffs.

Stat check: McMillan entered the game fifth nationally in scoring at 25.5 points per game. He finished with 16, bringing his average to 23.6.

Strong like Bulls: I didn’t realize how much size UB has, even on its bench. Nate Oats doesn’t use anyone under 6-foot-3. That’s helped UB’s bench to outscore its opponents’ bench in every game this season, and that continued Saturday, with UB’s bench outscoring Canisius’, 48-21. Rebounds were 42-39 Canisius, but UB’s size affected Canisius’ offense in other ways, deflecting shots and passes and clogging up lanes.

Crumpton tweaks knee: Canisius forward Jermaine Crumpton, playing in his second game of the year, went down holding his right knee with 12:16 left in the second half. He was able to limp off the court. … He checked back in with 8:31 to go and promptly took a charge but didn’t look 100 percent.

In the house: This game was played at First Niagara Center the last two years as part of the Big 4 Classic, but all four schools couldn’t reach an agreement for this season. Attendance Saturday was not immediately available, but I’m guessing an announced crowd of roughly 3,000, which included UB’s all-time leading scorer, Javon McCrea.