Canisius grad Cory Conacher had a goal and an assist in his first NHL game Saturday and was named third star while his Tampa Bay Lightning beat the Washington Capitals 6-3.

Wearing jersey No. 89, Conacher played left wing on a line with Vincent Lecavalier and Teddy Purcell. He was plus-1 with two shots on goal in 13 minutes 50 seconds of ice time, including 4:42 on the power play. He was not credited with any hits or blocked shots and did not take a penalty.

Conacher’s goal gave Tampa some late insurance, putting the Lightning up 5-3 with 6:36 left in the game. END_OF_DOCUMENT_TOKEN_TO_BE_REPLACED

For all the credit we give Miller, we're also very hard on him. That certainly comes with the territory, how much is too much? Jen Fuller/NHLI

The farther removed we get from Buffalo’s playoff exit, the more I find myself appreciating Ryan Miller.

Maybe it’s that we just witnessed consecutive playoff games with 10 goals scored (it was 11 on Tuesday if you want to get technical). I can’t help but watch these games and think, “I’d be furious if that one went in on Miller.”

There were a lot of times this year when Miller would get scored on and we would say, “I need my goalie to stop that one.” Granted, there were some soft goals, but maybe we were being too hard on him.

Goalies are human, just like the forward who turned the puck over and the defenseman who fell down to lead to the goal. They aren’t robots. They don’t automatically save all of the “easy” ones — whatever we decide that term means.

From Game Two of the Boston-Tampa Bay series, I’m thinking specifically of Tampa’s third goal from Vinny Lecavalier. Boston had a two-goal lead midway through the second with a power play to kill. Get through this and they’d be well on their way to locking down the victory and taking the all-important first game.

But what happens? Lecavalier takes a slap shot from the top of circle with minimal traffic and beats Tim Thomas five-hole to bring the score within one. Make no doubt about it, that’s a bad goal at a key point in the game. And if that was my goalie, I’d be ready to rip his head off. You can only yell, “Paddle down!” at your television screen so many times.

In Game Two of the Vancouver-San Jose series, take even the first goal of the game from Logan Couture (who I really like, even for someone who can’t grow a beard). It’s another power-play goal and it was poorly defended, but what was Roberto Luongo doing? Couture has a rolling puck. His options are limited, yet Luongo still found a way to be completely fooled by the head fake and gave the lefty the entire forehand side of the net to shoot into. 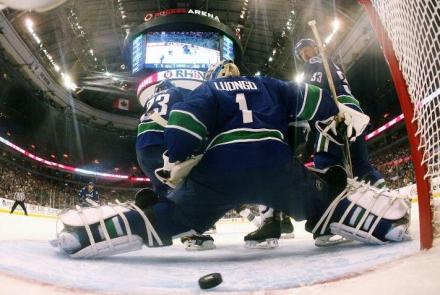 Not the Couture goal, but Luongo probably wants this one back, too. Harry How/Getty Images

When it’s not the Sabres who are playing, I get excited when someone scores a goal. (Just ask my brothers, who are getting fed up with me yelling “Score!” every time one goes in.) But if that was Buffalo getting scored on, I would be livid. I would say unrepeatable words and items would be thrown.

This gets me back to the original point, maybe we are too hard on Miller. These things happen, and we can’t expect him to save every single shot. There are plenty of other good goalies out there, and they sure don’t.

Antti Niemi, they said, is the first goalie to reach the conference finals two years in a row with different teams. He’s pretty good and keeping the puck out of the net. Luongo led the Canucks to the President’s Trophy and is the best bet to hold that other big trophy, too. Thomas led the league in save percentage and Dwayne Roloson is doing incredible things for a 41-year-old (did you ever think he’d be here back when he was with the Sabres?).

All four are phenomenal goaltenders, and they let some bad ones in, too. We cannot be saying “I need my goalie to stop that” after every goal we judge Miller might have been able to get a limb on from the comfort of our own homes. You could certainly make the case that Miller is the best goalie in the league — or if want to, the entire world — but if he can’t stop all of those shots, who can?

After Buffalo lost Game Seven, I wrote about how angry Miller should have been that he stole two games for his team and they couldn’t even repay the favor. Not many goalies have had two shutouts in a series and lost it. Was Miller great in every game in that series? No. But if these comparable (perhaps, better) goalies are having the same problems, if not worse, maybe we need to take a step back and realize a good thing when we have it.

Bad goals are part of the game. Just ask the forwards. Martin Broduer is well past his prime and there are no more Dominik Haseks or Patrick Roys out there to put on goaltending clinics 82 times a year. What we have in Ryan Miller is the best the world has to offer right now, and if that isn’t good enough, there’s a problem.

In fact, that probably tells us more about the Sabres actual problems than anything else. Our problem sure isn’t the man between the pipes; it’s what’s in front of him.